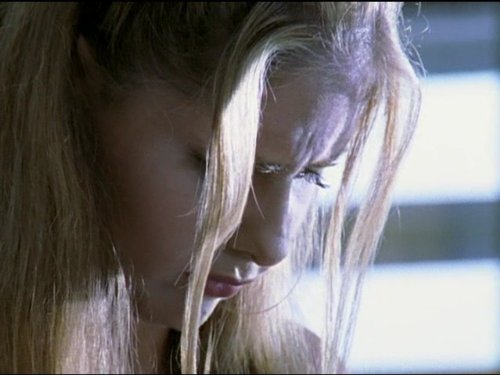 Xander walks into class naked except his boxers-shorts, Willow is in concert but she can't sing, and Giles suddenly finds himself unable to form coherent sentences - the residents of Sunnydale are living out their worst nightmares, and Buffy's nightmares are worse than most.
At the hell-mouth, the Master of evil explains to his boy heir Collin that fear rules people better then love or hate. He manages to use the young schoolboy Billy Palmer to make every student of Sunnydale High's terrifying nightmares come true, ranging from Xander appearing in class wearing only boxer-shorts to being chased by murderers, losing one's favorite abilities or poisonous spiders coming out of one's schoolbooks...
SPOILER WARNING This is a good episode that clearly sets us up for the rounding the season off. It also introduces us to Hank Summers, who has just the right amount of appearances over the shows running to make his character as the absent father work. I love the small characters nightmares, especially the cool guys and Cordys nightmare. Wasn't hugely impressed with Billy's acting, but it worked for the eeriness of the episode. Bringing in the use of the Master at the end was brilliant. Also, I loved Buffy as a vampire, that was a brilliant idea. The way it went from Giles' nightmare to Buffy's, seamless writing. Overall, another great episode.
Nightmares

The Good; Buffy's dreams of the Master are truly terrifying as is his burying her alive which of course she'll experience for real in Bargaining. Giles' fear of not being able to read and Buffy dying are also excellent. Willow's stagefright and Cordy joining the chess club/bad hair brigade are utterly hilarious. It rather reminded me of the ep of Sabrina;TTW where Sabrina places a spell on her arch enemy Libby the haughty cheerleader turning her into a nerd only for Libby to become Queen of the nerds and start mocking the less clever. Semi-naked Nic Brendon who in the great comedy tradition wears embarrassing boxer shorts. Some great CGI giant wasps. The Joyce/Buffy scenes. The tough guy whose mum turns up at school (don't know who he is but he resembles a character from Grease?)

The Bad; The scene with Buffy and her dad is just too cruel. Apart from that, not much.

Best line; Almost Xander's; "Your balloon animals were pathetic!" But the winner is Joyce; "Your father loves you dear but no more than I do"

Observations and questions; Xander suffers clourophobia (fear of clowns) whilst Willow suffers arachnophobia (although she faces down a giant spider in season 7). He also fancies a teacher called Miss Tishler demonstrating his fondness for older women again. Willow says that there is marital tension in her house (and as we later learn in Xander's also). The Master says he met the last Slayer, did he kill her? Here we have confirmation that Buffy was born in 1981 and is 15 turning 16 in this ep (so shame on you if you fancied her up to this point ) This begins the long tradition of disastrous birthdays for Buffy. First appearance of Hank Summers in the show. The only time we'll ever see Buffy as a vamp but she's still Buffy. You wonder if this is because it's just a nightmare and she's not truly been sired or even if a Slayer becomes a vamp that they're not evil, they're still the Slayer?