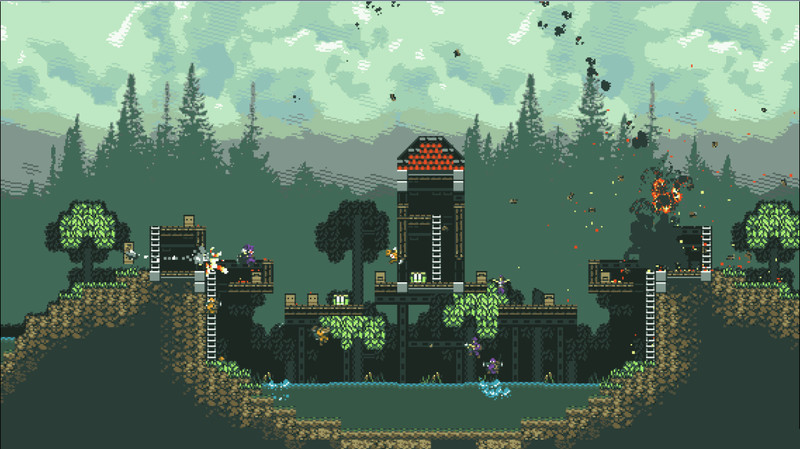 As of May 2018 Trench Run has a much lower price to reflect that it is mainly a 4-PLAYER local couch multiplayer game (with optional bots play and online game support). Unfortunately the game never gained enough momentum to sustain a multiplayer community. But we still believe that it is a fantastic game to play locally with friends or with bots. It is easy to pick up and fun to play on gamepads. The price is low and in return for buying it you'll spend a hilarious couple of evenings blasting your friends. Enjoy!

Make friends, then blow them to bits!

Blow your enemies to bits in muddy trenches, then sip wine with them at the bar in the first multiplayer shooter with no death.

Listen to a relaxing feel-good gypsy jazz soundtrack as you watch your screaming enemies ride rockets and explode crashing into walls. Howl with laughter. Repeat.

Turn into a shrub. Have a dance off. Buy a pet crocodile.

See you at the bar! 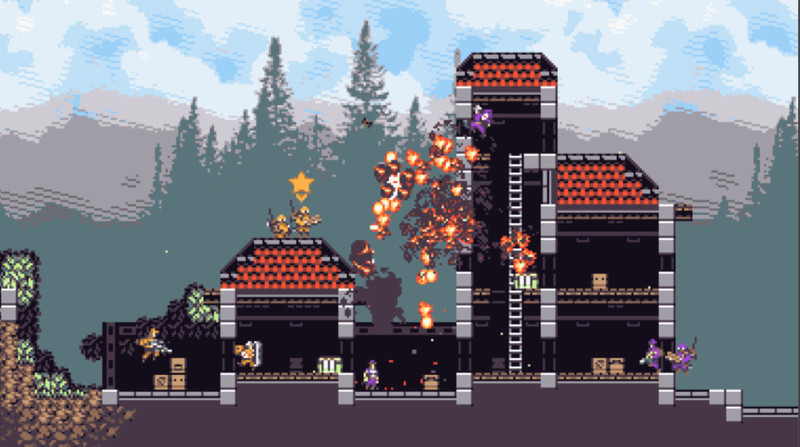 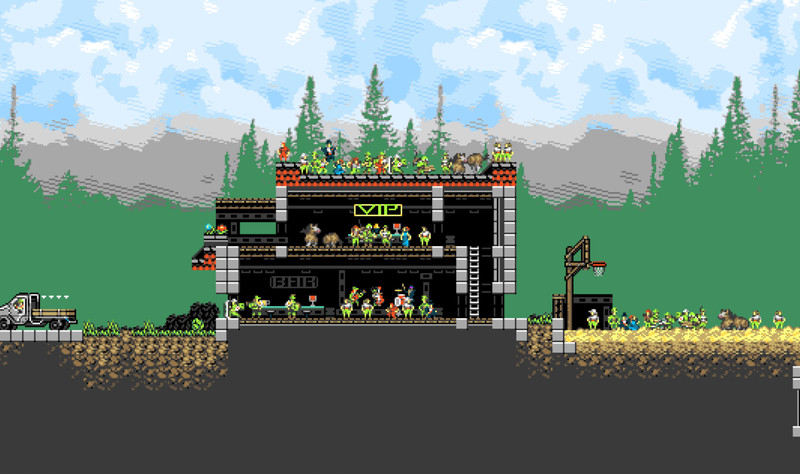 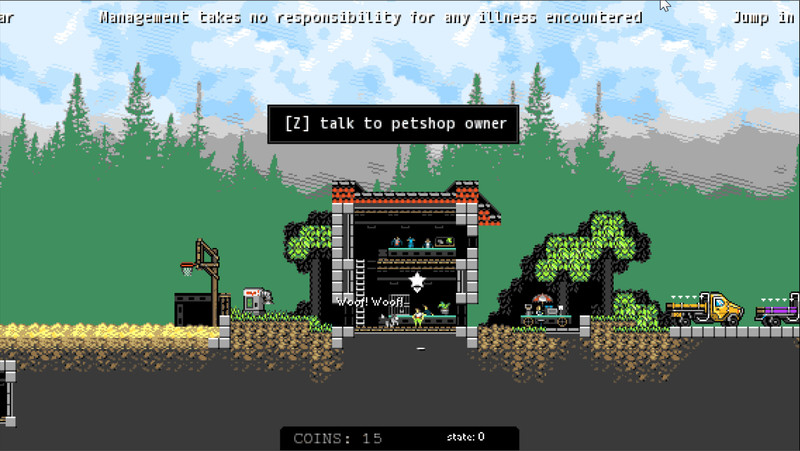 Trench Run is a 2D multiplayer shooter that is exclusively about shooting people, blowing them up, and having fun in the process

The gameplay is very simple: you control your characters using only only 2 buttons and direction keys (you could play with a NES controller), the maps are small, there's no story, no base-building, no leveling system\u2026 You can immediately buy the game, join a server and blow stuff up. The game is very fast paced, with explosions all over the place, corpses flying across the map, buildings getting blown up, it's very hectic and hilarious to see.

There are 5 classes available that play quite differently:
- the assault has an automatic rifle and grenades
- the demolition has a rocket launcher and C4
- the commando has a knife, flash grenades, can climb walls and defuse C4
- the sniper has a sniper and can camouflage
- the medic, only available in \u201cRun\u201d mode, has a shield, ammo boxes, and can revive his teammates

There are 2 game modes: Run and Skirmish. Skirmish is self-explanatory, it's 4 players trying to kill each other, the player with the most kills win.

Run is a team vs team mode where the goal is to run to the other end of the map while dodging enemies and killing them. There's a bit of tactic involved : you can try to be sneaky, hiding in a bush or using a flash grenade, or defend a strategical corridor from a window, or be a medic and help your teammates with ammo and health.

Outside of the 2 main modes there's a lobby where players can meet in between matches, chat, play basketball, buy pets and costumes and drink beers.

There could easily be new modes, maps and even classes created for the game as it's entirely moddable, and you can run your own private servers.

So this game is awesome, but it has a population problem. There's generally always someone to play with, but the most I've seen online was 6 players and sometimes I have to wait 10 minutes in the lobby for someone to connect. You can still play with bots, they're not too bad, but playing with real people is obviously way more fun. If you're lucky and have irl friends who are into fun games, you could play with them in local multiplayer too (up to 4 players).. Controllers don't work on OSX and Linux so am unable to play with friends. Developers have confirmed that they don't know how to fix this issue.. Fun game but no one is every online. Maybe if it had players, but it doesn't. And the game's forums are plagued with "wait until it comes out on steam, it'll get players then!" sort of posts, which makes it a running problem.

It's also an inherently simplistic game, so it won't have staying power.. great game, dead servers, pity.. My experience with the game was limited to its main "Run" mode. Unfortunately, even accepting that the game's extremely limited player precision, weapons, effects, enemies, and level variety are somewhat inherent to the retro genre it portrays, I would not recommend this game even to diehard fans of retro \/ 8-bit, as its gameplay is so utterly simplistic and inaccurate.

I had no idea I was buying some "arena" game where the primary purpose is moving from left to right on very small maps before the opposing team (or in my experience, bots...) gets to their "side of the level" first. It's a really odd mechanic and doesn't seem to fit this design very well. The game itself lacks much of the implied "fast pace" action as seen in the trailers, and instead you meander your way from left to right (or right to left) over a short distance within a limited 1:00 minute time span for each map, clumsily lining up shots and grenades and hoping you can make it to your side of the level first instead of the other team. The strange multiplayer insistence really hinders what could have been a cool aesthetic for a military game with a campaign \/ progressive levels with more of a through line. Instead, you face off on 5 levels which all mostly look the same (this one has snow though!) to see who can get to their side first the most, best out of 5.

Your character despite having full controller support seems to steer incredibly vaguely, with there not even being a traditional jump button. Instead you hold right and \/ or up \/ down and watch as your character automatically bounds over whatever is front of them, which makes for really imprecise shooting. You can't seem to aim up or down with your regular machine gun. You can stop to press A to awkwardly align a reticle over the area you want to shoot a missile or grenade toward, but then it's mostly crossing your fingers that the enemies happen to be within range of it, and it seems like most of the time you just end up clipping some outcropping barely in front of you and killing yourself instead. While this is funny the first few times, it makes for a frustrating, inaccurate experience before too long. Your medic seems to crap out health \/ revival orbs at random and the game advises you to "stick close to your medic" but with most all the characters on either side of the game looking like the same pixelated, small design it's hard to distinguish which one that is.

The old school military graphics, explosions, and ragdolling \/ amputated crawling the characters do all looks good, and overall the design \/ aesthetics replicate the feel of an old NES game well. The sound effects seem fitting to the events on screen with funny but brief character moans and screams amidst explosions and the like. The soundtrack is easily the worst part of the game for me with its incredibly repetitive, out-of-place plunky \/ lighthearted guitar and feels more like they're squeezing out a song made for the main menu across every single level. It reflects the light-heartedness of the game, but I wonder if the game had embodied more of a Medal of Honor \/ epic orchestral type soundtrack if it would have been a little more immersive and less elephant in the room, in your face all the time.

It appears only 2 people made this game for what it's worth. While it was worth a chuckle or two and I think the graphical style is cool, I will be trying to get a refund. It may be more fun local coop in its versus mode, however I never had the chance to play this option. I could see it still wearing thin pretty quickly.. Game is dead but i still have fun playinh multiplayer alone. So I bought this game thinking it would be like KAG (King Arthurs Gold) or similiar to the quality or depth of KAG with mechanical differences. To my suprise the game lacks really any depth and while I didnt play it for very long I was hit with immediate problems. First the resoulution is strange and smaller than what 1920x1080 is atleast thats what I was using. That aside I was brought to a screen asking for a username and then controls but apparently I needed an account so I was "Landmeow9". The controls are oddly mapped considering this game came out this year and from the same devs of KAG I don't understand why movement is mapped to arrow keys and actions to Z and X. As I went through I found it littered with weird design choices and not what I expected. Not to mention a glitch with trying to play single player, worked the second time. Then after being in singleplayer finally being able to play the game I found it...lacking. Maybe I was comparing it to much KAG, and I'am comparing as it is the only other game from these devs. While its neat it just feels like it needs a bit more polish. Id say buy it if its cheap and maybe wait if until servers get more populated and the game functions a little better, though im not sure if it will. I will not be playing this Im sorry maybe I had a bad first experience but unless Im convinced otherwise this game isn't really worth the buy unless on sale, ESPECIALLY IF YOUR LOOKING FOR DEPTH LIKE KAG.. This game is what i strive to be.
dead.. Great game, very fast pased and fun, great pixel art, the only problem is no one plays it. :\/