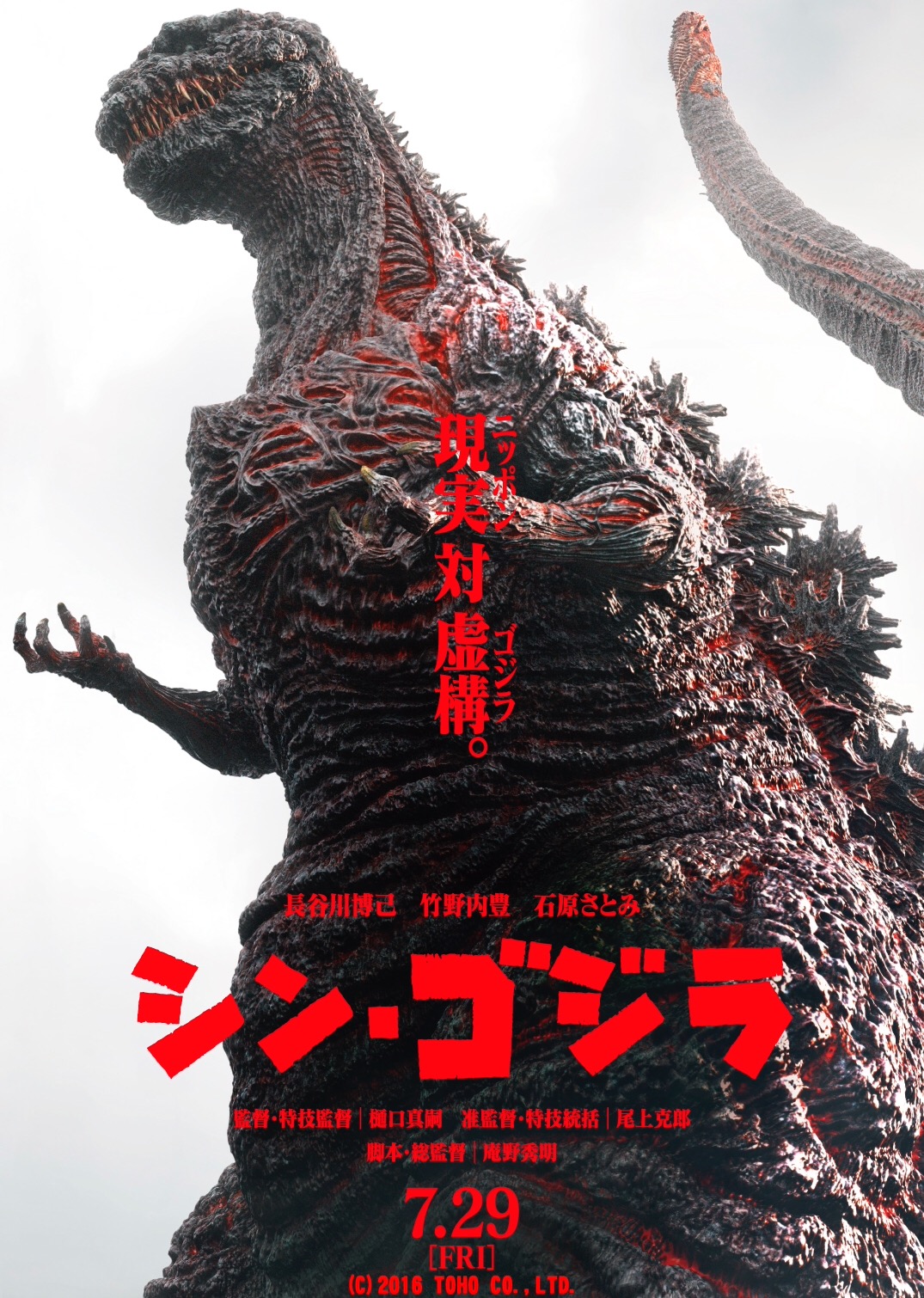 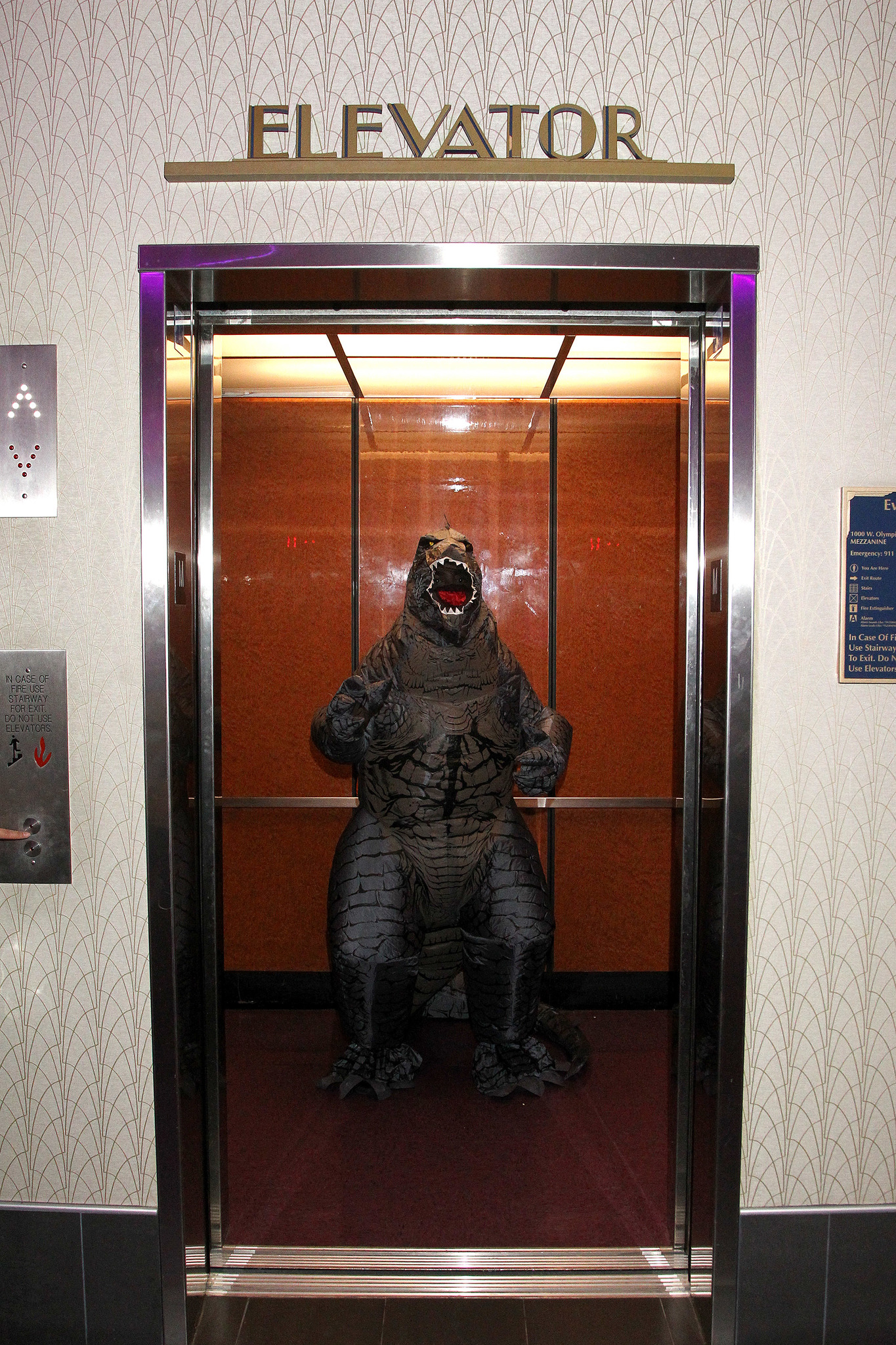 An unknown accident occurs in Tokyo Bay's Aqua Line, which causes an emergency cabinet to assemble. All of the sudden, a giant creature immediately appears, destroying town after town with its landing reaching the capital. This mysterious giant monster is named "Godzilla".
Nuclear waste and carlessness of man mutate a gilled creature in the Tokyo Bay. With social media capturing the footage, the emergency cabinet meets to find out what the creature is and if it will be a threat, but only to say that the creature is so massive it's weight would crush it if it came on land. They are proven wrong as the creature comes on land scaring the people of Tokyo and knocking over buildings. The cabinet sends a defence force to eliminate the monster but it evolves and starts overheating with radiation. This causes the monster to run back to the bay, leaving a risk of returning to the cabinet. Later it comes back in its next form and is now taller and indestructable. The cabinet gives it the name "Godzilla".
Oh dear! Whoever is scoring this movie above a one score, is clearly in need of hospitalization. Someone pointed out that not understanding the dialogue would somehow bias our opinions of this movie - that we didn't understand the concept. Sorry, but I may not speak Japanese, but I can tell a crap movie by it's content (or lack of) and dreadful Special effects. The plot is thus: Monster comes out of the sea and wrecks the joint - the end. The 'monster' resembles a Barbecued Squirrel, which doesn't blink, or react at all, much like the Plasticine model in the original. It does however shoot laser beams out of it's back. Most of the first 50 minutes is taken up by ever increasing amounts of people in blue jumpsuits, in ever more expansive rooms, sat around ever-expanding tables, talking and talking and talking and talking - before the toasted squirrel takes a single hit. Every single line is delivered forcefully and over dramatically, beginning with, or ending with the word 'Sir'. The costumes consist of Jumpsuits or black suits and the hair and make-up consists of whether the hair is parted on the left, or the right. What I find fascinating is the amount of paperwork these people are reading in every scene and what the hell is on all those computers??. I mean, what information do these pages contain? It's a monster attacking, a city, not Al Qaeda! You know things are becoming more serious when the outfits suddenly change colour! The cream suits are sent in to provide a solution to a foe who does not move, doesn't evade bullets, or bombs and is as elusive a foe as a brick. It cannot use it's arms and so belly flops on to buildings. What is strange is the odd usage of English, which breaks out for a few seconds, here and there?? It's very odd. If it were not for the stunning Satomi Ishihara, I would have turned off after a couple of minutes, it really is 'that' bad. The hype this movie has can only be coming from Asia, as we are accustomed to better CGI in the Western world these days. This is as bad a special effects attempt as I've seen since the 1980's. The solution to this boring and laughable saga suddenly arrives during an impromptu Origami session, where maps are used to fashion strange shapes, which suddenly lead to a 'Eureka' moment and a plan is hatched to dispatch the creature. On a plane, high above the city (despite Godzilla shooting down anything that flies), the matter of nukes is discussed, by an actor, playing a U.S government official, who wouldn't even secure a role in an insurance advertisement. He is a simply dreadful actor. We have the copied Japanese version of the rousing Independence Day speech, given to copious numbers of further jump-suited individuals - clearly, things are now at the white jumpsuit, def-com 1 stage. Shin Zilla is surely the most advanced creature man has ever seen and yet, does not have the ability to blink. Surely a strong fan would have caused the creature more harm than any missile. This is simply shocking in all departments and you have only yourself to blame if you waste 2 hours of your existence watching this dreadful movie! I'll never look at a spikey poo in the same way again!
After reading the rave reviews on Shin Godzilla, I was excited to see this new interpretation of the giant reptiles attack on poor old Tokyo. Within 5 minutes of watching the film my excitement was quashed.

The idea of centring the devastating arrival of a 300 foot monster onto Japanese shores, on the political, military and scientific debate of its people, could have really worked. Unfortunately it does not, and this due to a number of fundamental issues in the making of the film, which is likely connected to the films limited budget, sadly.

I will list in what my opinion, are the big problems:

1. The special effects and CGI are nowhere near today's Hollywood standards, seriously hampering the Godzilla action scenes. The restraint's on the CGI prevent Godzilla from moving during his scenes. He is always motionless when being attacked by the military, almost like a statue, whilst maintaining a very silly smile on his face.

2. Don't know whether this is just a Japanese thing, but the continuity editing feels chaotic throughout.

3. And sticking on the continuity, half way through the film Godzilla actually decides to fight the Japanese back after being pummelled by their missiles. He glows purple before unleashing a huge firestorm of power from his back, tail and mouth which completely levels a good portion of Tokyo. Burns it to the ground, with a similar impact to that of a nuclear weapon. At no point post this devastation, in any of the exterior shots of Tokyo, can the aftermath of this devastating attack be seen or felt. Tokyo looks absolutely normal, no smoke or fire anywhere, even the area surrounding Godzilla (he falls a sleep after his attack?!), looks unharmed. Admittedly this is again a budget restraint.

4. The acting and dialogue are both wooden throughout. Neither seem to catch the expected level of shock and disbelief when the Japanese people are faced with the unprecedented phenomenon of Godzilla.

5. Giving the political stance on the film, it is very dialogue heavy. the talking is very rapid. This makes the sub titles difficult to follow, particularly when they are white on a lot of light backgrounds. Not the films fault this one, just a gripe I had.

6. With the exception of the classic Godzilla theme, the music is mostly horrible.

7. This is the overwhelming issue. Very early on in the film, the 'first phase' Godzilla arrives on the shores of Tokyo, and he looks ridiculous. He has these cartoonish massive fake silly eyes which make it impossible to believe this could be a real beast. Its very difficult to take any of the film seriously after this point. To be fair the look of Godzilla improves drastically when we see the 'second phase' version. It is actually a really innovative design, though still ruined by a lack of movement and again the eyes are all wrong, remaining still, looking particularly lifeless and fake.

I feel I have been harsh here, given the limitations the film makers had to abide to (feel i have typed far to much!). I mean in some ways its still an achievement to produce a monster movie on a shoe string budget. But ultimately it was a bold decision to take on such a project with limited resources.

Also I believe it is irrelevant that this film was some kind of political satire relating to the Tohoku earthquakes and other nation-wide disasters the country has endured. This film is suppose to be a built around the realities of a giant destructive monster attacking the huge urban populous that is Tokyo city, MAKE NO MISTAKE ABOUT IT. If this fun but frequently exasperating new chapter in Godzilla’s never-ending story feels like a major anomaly, its eccentricities are what best allow it to channel the forward-thinking urgency of Honda’s original.