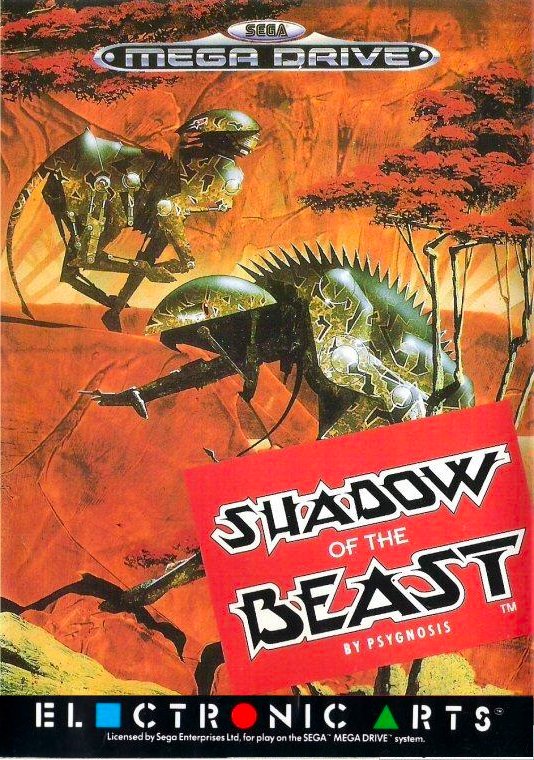 In this game you assume the role of a beast. You travel in a vast, mystical land, fighting your way through many different enemies. You have to reach the enemy stronghold where you will, eventually, face the final challenge.
Shadow of the Beast is one hard game to complete, it's got great music, great graphics but the game-play is really difficult. One thing that makes it hard is the fact that you only have one life, if you get killed it's game over and you need to start all over again but this makes Shadow of the Beast a real challenge and that's why I like this game, the levels are full of dangerous obstacles and enemies that really requires skill in order to get through.

The game sees you playing as a Beast who was once human, he was taken away as a child and after years of darkness became a creature to serve the Beast Lord. One day the Beast remembers his past life and what the Beast Lord did to him when he was a child, now he wants revenge and goes on a journey to defeat the Beast Lord but his journey won't be easy since the Beast Lord knows he's coming for him and his loyal minions will stop at nothing to protect their master and stop the Beast from completing his quest.

Shadow of the Beast is a really challenging game that should be played. Check this out. 10/10
Since the game contains many extremely grim and bloody graphic details, it was clear in the first place that it would be difficult to obtain an approval for the SNES by Nintendo. On the account of Psygnosis, the programmers' team Probe tried to cope with that balancing act. Many censorships have been made, but some other details (like jumping, partly bloody eyeballs) were left in the game. Nintendo of America, however, showed no mercy and failed the finished game "Super Shadow of the Beast" with the result that it has never been released. Nonetheless, the SNES Version of the game can be found in the internet.

The level structure of the SNES-version is slightly changed in a few places and the last level has been altered completely. Except from that it is mostly similar to the original version. However, the whole music has been replaced and the graphics were designed a lot more colorfully, which destroys much of the atmosphere. This version cannot compete with the original. What is especially cheeky is that the difficulty level was extremely raised in such a way as to finish the game is only very difficult now. One fact which is not well known about Shadow of the Beast is that there are two Mega-Drive versions. Besides a standard edition which was released in the rest of the world, there is an own version for Japan as well.

The background story is as follows: When Shadow of the Beast was converted for the Mega Drive, an accident happened at the creation of the module for the NTSC-market: The guys responsible for the conversion of PAL to NTSC messed around in such a way that the whole game, including the sound, ran too fast by 16 %, which raised the difficulty level (you can correct the speed on an emulator). However, the problem does not occur if you play the game on a European Mega Drive console with 50 Hz refresh rate. The later programmed Japanese Mega Drive version featured the game with the right speed and improved sound and graphics as well.

Nevertheless, in doing these changes for the Japanese Release the programmers probably considered the game to be able to make use of some additional blood along the lines of "blood is good".