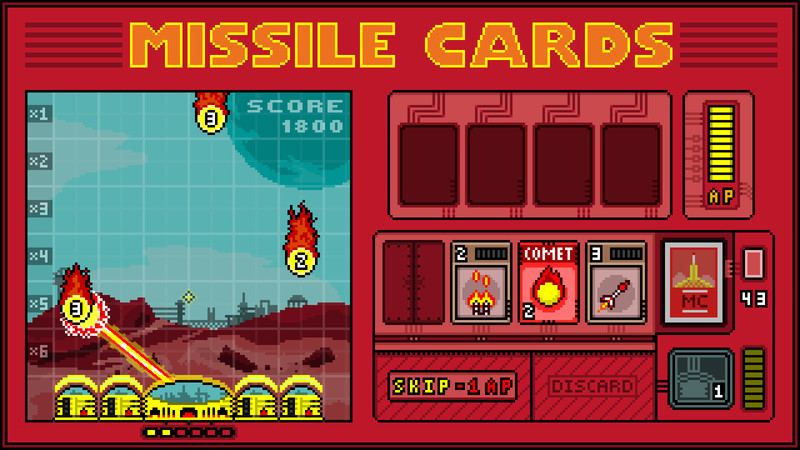 Arm your defenses and blast away flaming death orbs, nuclear warheads, and other hazards hurtling down from space before they annihilate your base. Loosely inspired by the Atari classic Missile Command, Missile Cards re-imagines the intense bombardment defense gameplay as a turn-based strategy card game. Unlock new bases, upgrade your arsenal, complete missions, and challenge your card skills against increasingly brutal decks in this highly replayable solo-card game. 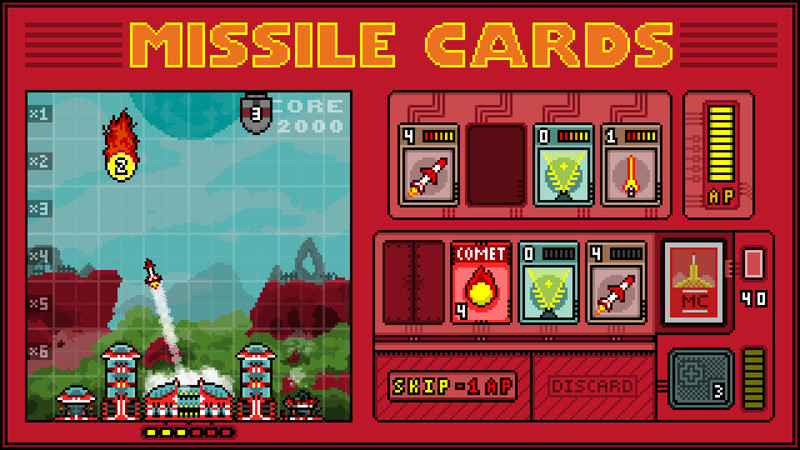 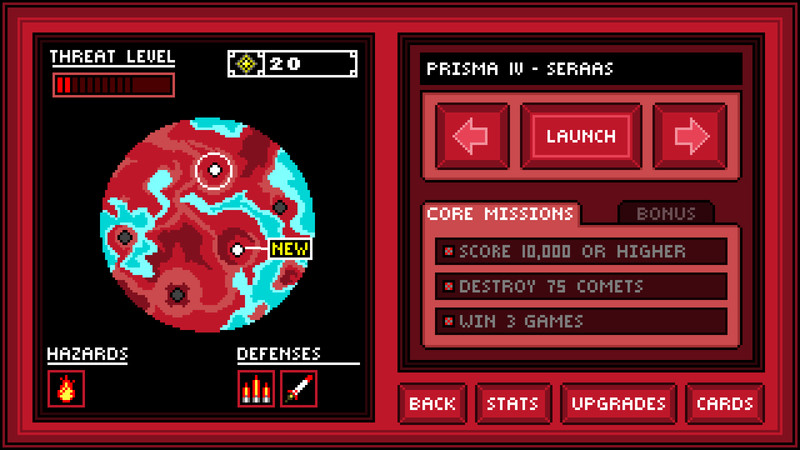 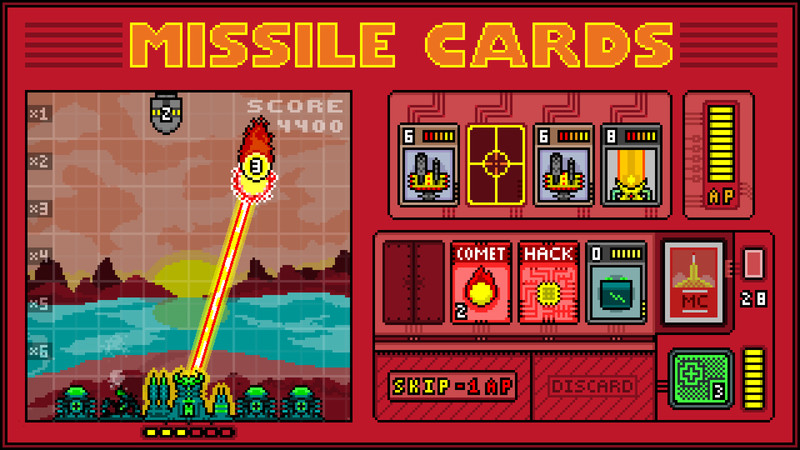 The developer, Nathan, has created a very addictive game here and I think I've only just scratched the surface after a few great hours of entertainment already - at a bargain price too.

While initially Missile Cards can appear to be fairly simple game (there is a tutorial) the depth soon becomes apparent:

- Do you go for higher scores by taking threats out later (see the x1, x2, 3x etc. grid numbers for score bonus) but then run the risk of being overwhelmed?

- There's a nice point based upgrade system for your base defences that's earned with experience gained, and you'll need those upgrades later!

- Each area introduces different mechanics and new dangers - which will have you cursing as you try to deal with them - but with that one-more-go feeling that good indie games always seem to have.

- You can discard your cards to power up your defences, but the choice to do so and when isn't always an easy one and adds a nice layer of depth to the game.

- There are some rounds where you wonder if you somehow insulted the random number generator's mother, which determines what order cards are dealt out.
It can sometimes be very difficult to claw a victory, but likewise, the RNG gods can smile upon you, and as you gain more experience and upgrades you're better able to deal with the odd curveball it throws your way, but it's all part of the fun and challenge.

All-in-all, Missile Cards is a great game that's well worth your time and money.
Developers like Nathan deserve a big pat on the back and our support to continue making good games like this - so go ahead and buy it, it's a steal for the amount of entertainment on offer here.. At the very start it's pure luck if you win. Strategy is plain simple, therefore the gameplay is tedious and just luckbased-ly unfair.
New cards appear in a very slow animation while my strategy was already clear and I hate to wait in a game.
It's very grindy. You need to play through these luck games many times to get debris to buy one new card of so many available cards to unlock. And you have to play even longer to get XP to get a base point which will unlock stuff for your base.

Do I want to grind a tedious unchallenging task to get further into this undemanding gameplay? No. And I can't reccomend this for players of my kind.
If you search for a time killer, though, go ahead, this will serve.

Also, the music has annoying sounds and is very repetitive.. I love this game. Perfect for playing during work hours. I really like the rogue-lite -ish progression system. It is grindy but its enjoyable. 10/10.. Impulse-bought this one on release for heaven knows what reason (I think I saw it on Twitter? Maybe I was just feeling generous) and was... surprisingly enamoured?

Most card games bore me, but this one's intuitive to pick up and remarkably nail-biting at times. Lots of risk-taking and balancing of various needs you can take beyond the bare minimum survival necessities. The strategic element is all very moment-to-moment, but it should give your brain a nice massage during your next lunch break.. I'm not a really big fan of card games, but one has grabbed my attention. Simple and yet challenging gameplay mixed with nice bleeps and bloops and snazzy retro style art. And hey it's 5 dollars, good deal if you ask me.. Neat little game with surprising depth.. This is the first time I write a review, and I only do this because I loved this game and more people should play it!
I was expecting this game since I had played the demo. And all the waiting really paid back.
It is one of this games with really simple but deep gameplay and mechanics: you learn quickly how to play, but as you progress it requires strategy and a lot of thinking for your next move.
Add to this the lovely pixel graphics and retro music, many upgrades, bonus missions, and you have a really awesome game to spent hours on.
You should definitely buy this Missile Cards!. An elegant highscore chasing game of solitaire that, sadly, actually seems extra topical with recent events.