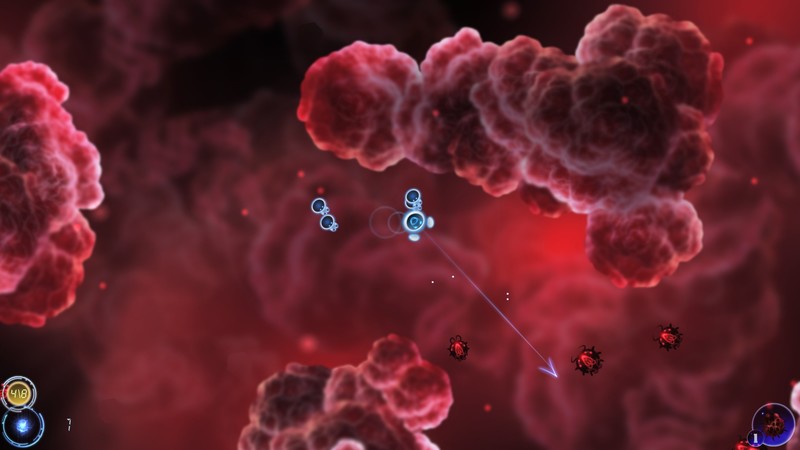 "Inside Me" is a top-down shooter in which you play as one of nanorobots embedded in the human body to fight infection.
While clearing the infected cells you will fight with various enemies and dangerous bosses.
The general gameplay consists in controlling more smaller bots in fighting with parasites.
During the game you will be able to reveal unique abilities which you can combine with each other. 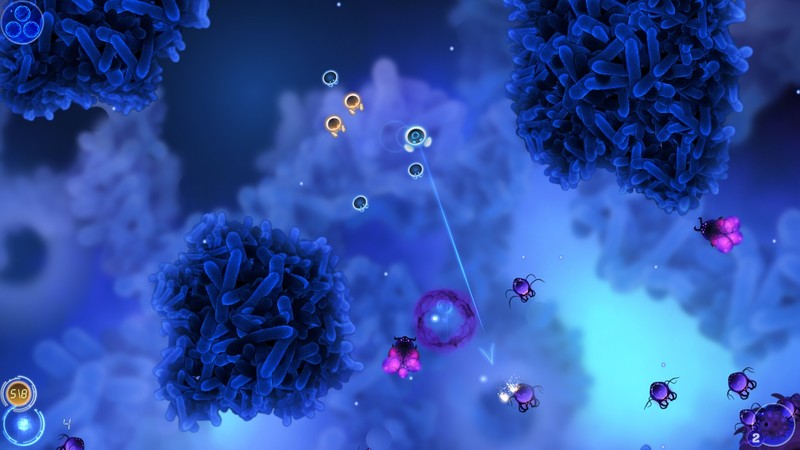 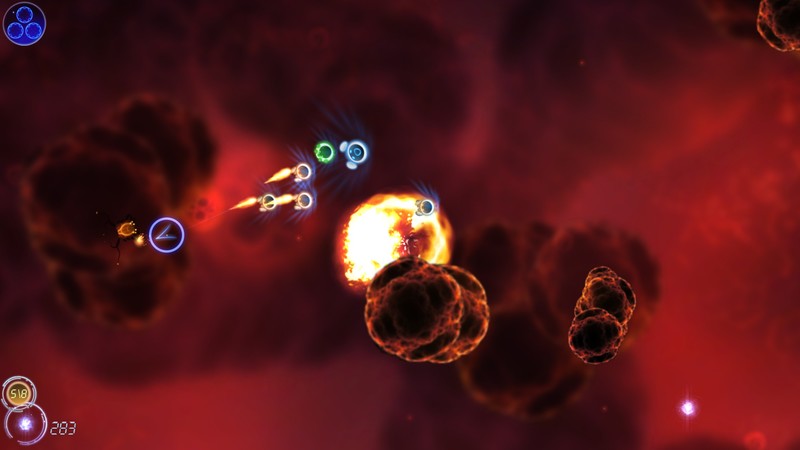 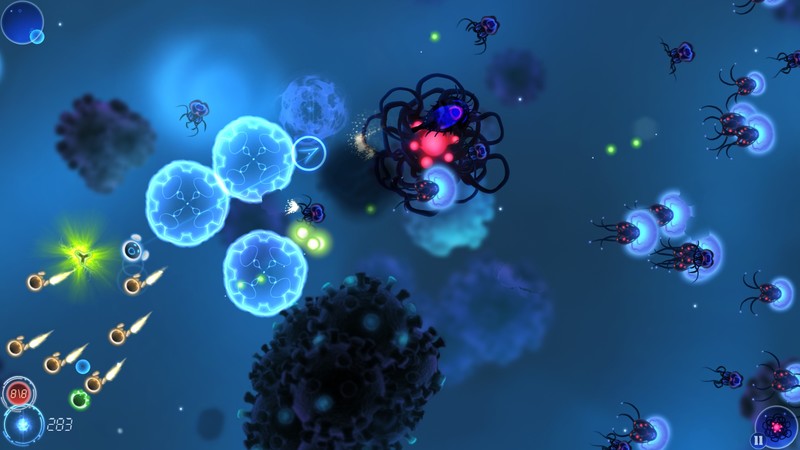 
If you're looking for a game that has the linear progression and difficulty from the late 80's - early 90s, this is it. It's a single player, learn through attrition type game. Some stages are top view and some are side scroller.

Pro:
It's difficult. I enjoyed that about the game because a lot of what's out there now tends to just hold your hand through progression without any real threat.

It looks nice. The visuals are nice. It reminds me of Ultratron in color and art style.

Cons:
It's single player. The game does market that and it plays well, but a CO-OP mode would be nice.

Very linear. The only choices you really make are based on which unit you select for each tier. Auto-rockets or sniper? Machine gun or shot gun?

In the end, I say it's a good game. 9.99? not really. I'd rather spend 4.99 for it. It's a good casual game to mess around on but it needs some specific things to go anywhere.

1- Achievements. Seriously how did this not happen?
2- Name the units and add an almanac with unit & enemy info
3- Stage select. Being able to replay some stages would be nice without starting all over.
4- Endless mode. Time Trials. Leaderboards.
5- Some sort of story.. OK this game looks like fun but it has 0 customerization of the key and I don't think these kinda games are suitable to play in the keyboard ! I hate actually playing it on keyboard !. I find this game to be very entertaining for what it is. It is a top down shooter that turns into a side scroller from time to time. It is really fun game that allows you to fight parasites inside of a host useing nano bots.. The feel:<\/b><\/u>
This is a great game with a lot of potential. However there are a few things that could be significantly improved.
The feeling is of a shooter, fast paced but really strategic and positional at the same time. I have never seen anything like it. You need to keep your eyes opened for immediate threats as well as avoid getting slowly pushed into a corner. The powers available are really strong but they have limited uses and cannot be spammed thus strategic use of powers is essential for success.

The gameplay:<\/b><\/u>
You play as a nanobot inside an organism which in itself is already cool. You collect energy and can use that energy to spawn other helper bots. You can keep the bots out and they attack enemies (and you can no longer fire yourself) or you can pull them insisde the main nanobot and then you can fire on your own. The bots are stationary but their fire power is higher than your own. You can pull bots and redeploy them at will for kiting enemies. After a mission you can use energy to buy different helper bots. Advanced helpers come in two flavors, once you buy one helper type, the other type becomes unavailable for that playthrough.
You get three main powers:
-a stationary shield that blocks incoming enemies (except mini bosses and bosses) and projectiles
-a mine that explodes after a while
-a mist that freezes enemies it touches

Powers may interact, for example a mine detonation will break a stationary shield in smaller travelling shields.
The freeze power can freeze a shield altough I dont know how it actually changes the shield.

The issues:<\/b><\/u>
The game is highly positional which is good but the screen does not always move to keep the player ship in the center which is contradictory to the positional spirit of the game. I mean if you need to stategise you should be able to see what is ahead of you and not be surprized by it.

You have no control over firing. This is really annoying. I mean most bullets you fire have a travel time and you need to fire ahead of the moving enemies but you cannot as there is no fire button. Everyone that can fire, does so at the location of the cursor but they only fire if the cursor is over an enemy and only when the enemy is close to you. This makes it impossiblle to shoot ahead of a moving enemies or even shoot at enemies that you can see but are far away! This coupled with the fact that the screen is not always centered on the player makes for some very frustrating moments.

You can only spawn basic helper bots during figts! This is a major downside. This means that while you may have lots of energy available you cannot use that energy to revive your advanced helpers. This makes a loss of a helper snowball to a major inconvenience. Some helpers are damage dealers and usually losing one is not such a big deal but other helpers are strategic and their loss could mean defeat. For example you may start the level with 6 upgraded attack bots, 1 helper and 1 antimissile bot. The loss of an advanced attack helper can be somewhat replaced by spawing a basic attack helper but if you lose the healer or the antimissile you are basically screwed.

The bugs:<\/b><\/u>
-The game crashes ocasionally with no reason
-I am currently stuck after defeating the freeze boss. It tells me to use the freeze power, I use it for a while and then the game cycles again to tell me that now I can freeze enemies...

The suggestions for improvements:<\/b><\/u>
-Make the player always be in the center of the screen
-Put in a fire button that the player can control. If the developers dont want players to snipe bosses from afar with no risk of exposing themselves then they could make the bullets dissapear after traveling a certain distance.
-Develop a mechanic to allow for spawing of advanced helper bots (that are already unlocked) - or at least a mechanic to spend energy to regain the bots that the player had at the start of the mission
-Eliminate the bugs that keep crashing the game
-Fix the issue preventing passing the freeze boss for some players

The conclusion:<\/b><\/u>
-Nice game idea.
-High potential not fully realised yet.
-Worth a buy but only at a discount. I got it at around 6 EUR but I think it should sell for less in its current state. It could be worth higher but only if the bugs and gameplay issues above are fixed.. DISCLAIMER: played over 3 h offline

If you search a simple, easy to learn but hard to master, shooter like old '80 - '90 games for enjoying some hours of frenetic shooting, this game is recommended.

You are an antibiotic and you should fight pesky viruses in a top down environment. Recover "energy" point in order to unlock more powerful "drones" for shoot down quickly the nasty viruses.

Also the game has all features announced by the Devs. Nothing more, nothing less. Just read the description in store page.