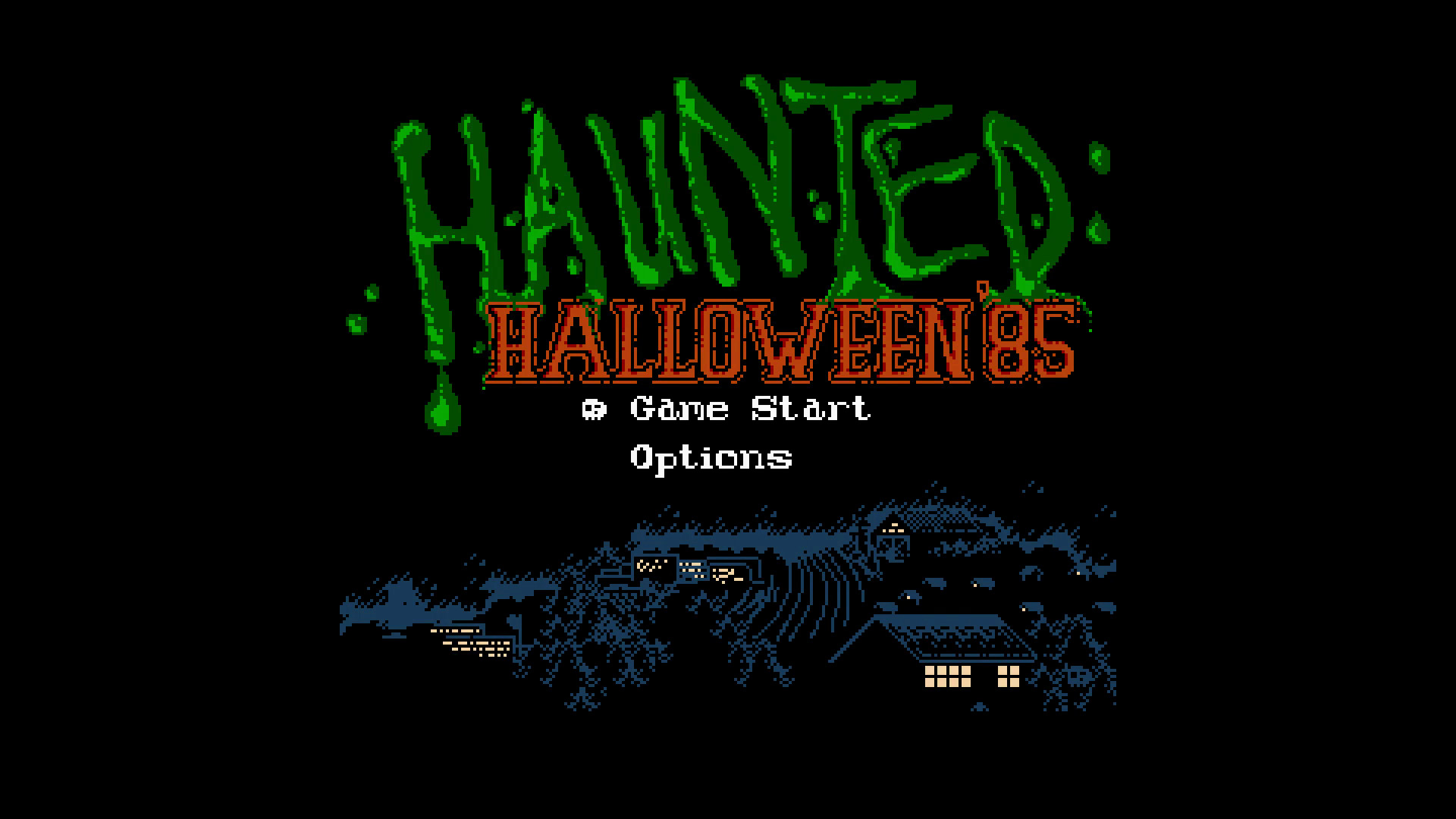 Are you rad enough to accept the ultimate 8-bit challenge on Halloween night?

HAUNTED: Halloween '85 is a new NES homebrew game featuring side-scrolling, platforming, beat 'em up action! It was originally released on cartridge in October of 2015 for the original Nintendo Entertainment System so it follows all the rules and restrictions of the original hardware. We are releasing a copy of that game in all its pixelated, 8bit, retro glory for your PC. The cartridge version can be purchased at www.cashinculture.com for those who still have a working NES or clone console!!

It's Halloween in 1985, the town of Possum Hollow has been haunted by an evil presence, turning even your best friends into brain-craving zombies and innocent pumpkins into poisonous, death-dealing obstacles. To get to the source of the evil you will need to battle the haunts, climb trees, avoid jagger bushes, navigate underground caverns and come face to face with an unexpected evil that you must overcome in order to climb out of your own grave. Six unique bosses await you as you battle through six different levels of haunted suburbia. Take control of Donny Johnstown and fight like the little bit-kicker that he is to prove that you have what it takes to save Possum Hollow!

While you're at it, check out the mind-melting sequel, "The Curse Of Possum Hollow" and help get it Greenlit: http://steamcommunity.com/sharedfiles/filedetails/?id=790172169 7ad7b8b382 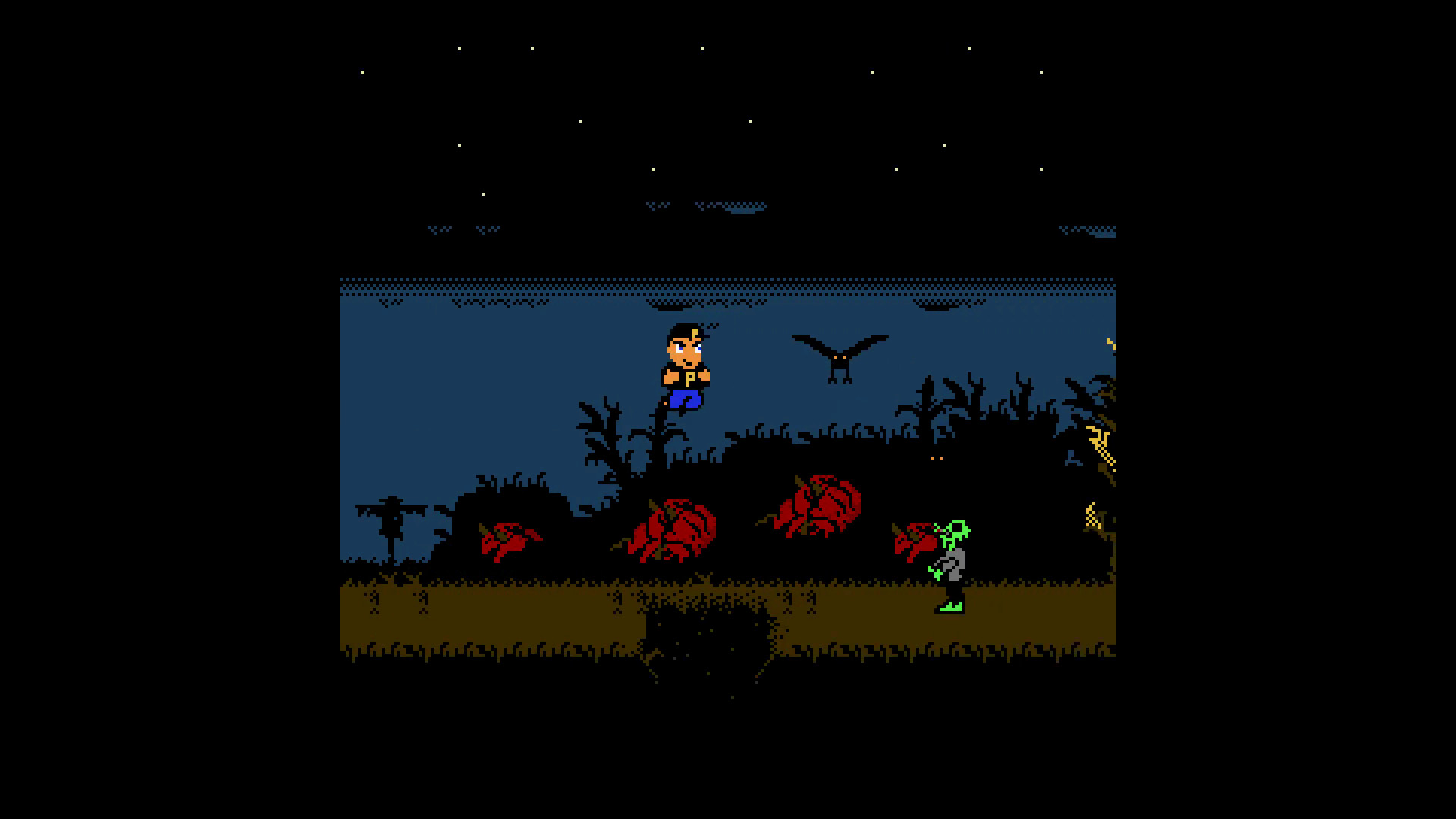 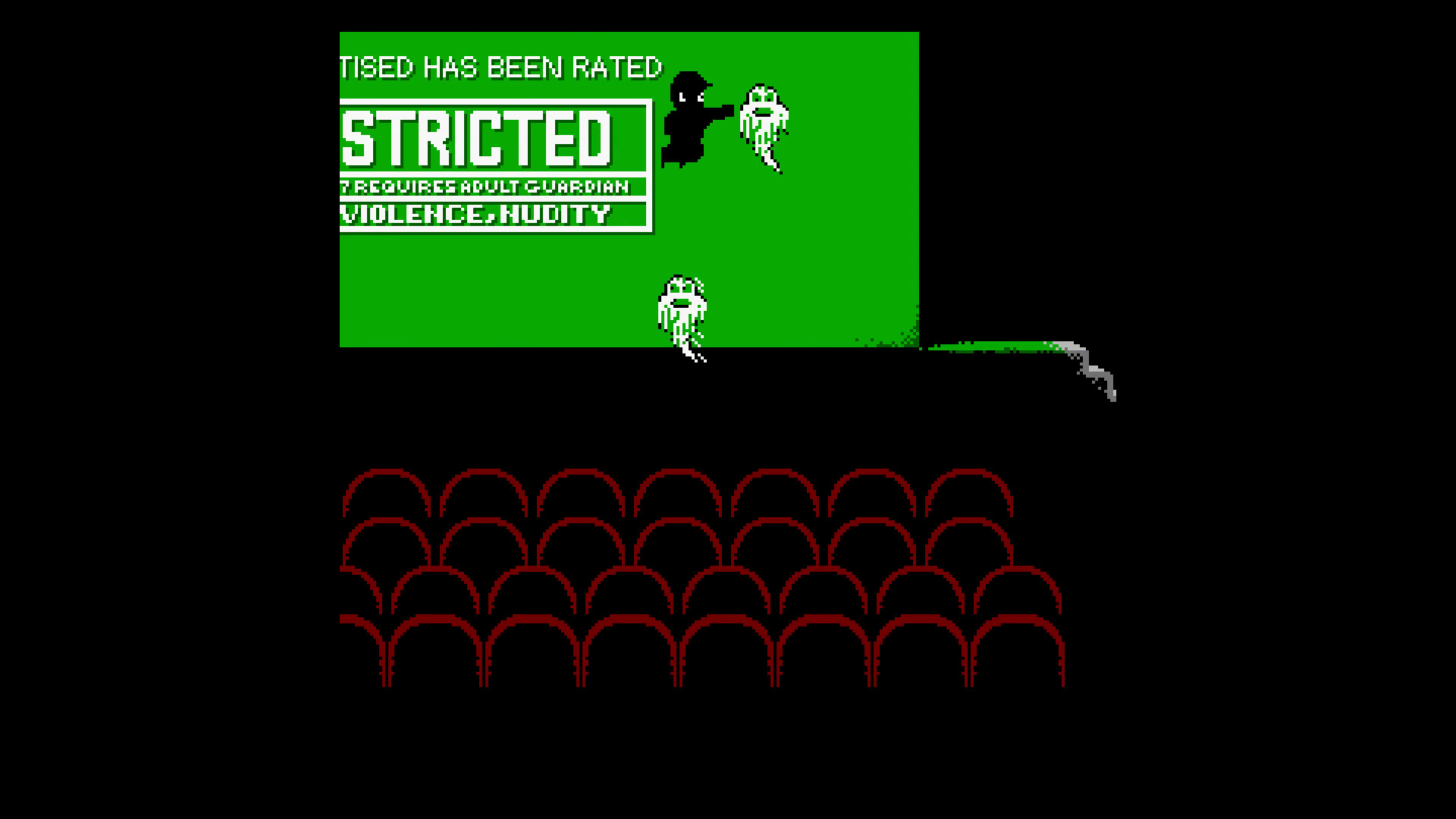 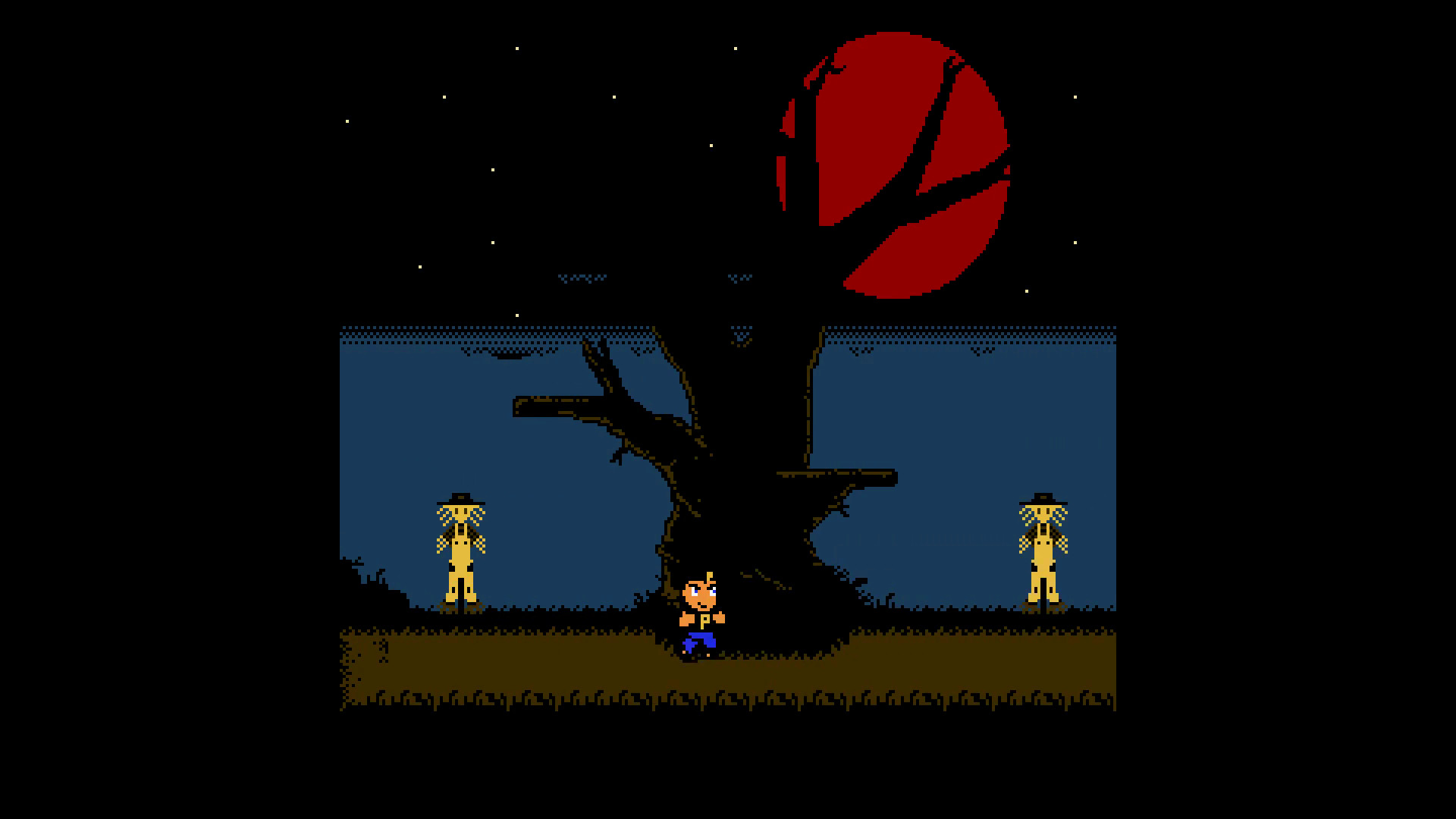 Amazing game. Simple but very fun retro experience.
I love the fact it was ported to PC instead of just being emulated.
And the backgrounds are beautiful and very creative. They remind me of backgrounds seen in games developed by Imagineering decades ago (more focused on realism than japanese pixel art from NES era).. This is technically an "early access" review, because I got to try this game before it came out when I went to an arcade\/pinball\/retro gaming convention, right off the bat I talked about how I felt like I was in the 80's when i tried the game on an actual cartridge.

The game's ost is interesting and deffinately gives off that catchy\/classic retro kind of creepy feel that you'd expect from horror style games during the NES era and the art style reminds me strongly of Double Dragon and River City Ransom on the NES, but the question remains, is this game a good game?

The game is an interesting game and deffinately lives up to "Nintendo hard" in terms of how tough old school games were, with basic gameplay (go to the right, just like a beat em up) but with platforming elements and difficult placements similar to Mega Man

However, where the game's problems are can be "located" if you will, with no ability to use passwords if you run out of contiunues or a file to save (although the game may be trying this to capture NES nostalgia, it can feel like a chore if your required to play througout the game in one run, especially with no way of getting back to where you were if you run out of continues) and some of the bosses (to my knowledge) take no effort to beat, for example you fight bigfoot on level 2, all I had to do after losing 1 life was stand on a tree stump without moving and beat that boss fight easy

Overall, the game is a nice game and deffinately feels like an old NES game and its nice to know that new games are being made these days for old consoles, however, I feel as though (unless this game gets patched) that due to it trying to hard to "match" the NES, it might actually turn off some people from trying the game, I would get the game if its at a discount or on a physical cartridge, but be ready for a challenge and be aware that the game can be slightly unfair. It's a decent little NES style classic sorta game, you just platform around and punch spooky enemies, would be better if there were powerups or more weapons because it feels a bit too basic if you ask me. Still though if you're looking for a classic experience its definitely worth trying, probably best to get it on sale though.. Great retro themed beat em up platformer.

The game is exactly like something that you would see on the NES, basic 2 button controls, one button punches and one button jumps. If you press down and punch at the same time your character does an incredibly useful uppercut. Control is super tight and the jumping in this game has a really nice feel to it which makes landing on tiny platforms easy.

The game is divided into 6 levels, you are given 5 lives and 3 continues to complete the game. There is no save or password feature here, you must complete the game in one playthrough and start back at the beginning if you do not. Luckily, there are pretty liberal 1-ups spread throughout the level and they regenerate when you die so it is always worthwhile to pick them up when you see them. If you want to take the time you can also cheese the game by finding areas with 2-3 1-ups, pick them up, kill yourself, and repeat. It is time consuming but if you are really struggling it is a nice way to give yourself an advantage.

Each of the games levels are fairly long with lots of platforming and a bunch of enemies thrown at you that come flying in from all directions. Combat is tight and feels pretty good, and there is no annoying knockback on hit which eases frustration of having to fight on tiny platforms. Each level also has many chaeckpoints, which is definitely a good thing, but if you need to continue you start back at the beginning of the level. Every level ends in a boss fight, most of which are pretty easy once you learn the pattern but you can expect to die a few times on each one as you do. There is occasional confusion on what you can and can't jump on and a few platforms that blend into the background but these instances are rare and do not detract from the overall experience.

The challenge of the game is about average for an nes game. I beat it on my first playthrough with only using one continue on the final boss. It is not an easy game but it is not battletoads or ninja gaiden either. If this game came out when I was a kid I would have loved it and it is a game that retro fans should definitely pick up and play. My only complaint is having to play through the whole game in one sitting. It is a pretty decent length and a save feature would have been nice for those who may not have time to pick it up and play through in one sitting.. Great throwback game to the NES days. My kiddos loved it and I can't wait to order a copy of the NES cartridge version.. This game is absolutely fantastic. Truly authentic to the NES in every way. Great work, can't wait to see Haunted: Halloween '86 on Steam!. Imagine River City Ransom with worse combat, controls, bosses, graphics, and music. This wouldn't have even been good in 1985. I got it as part of GAMEPUMP or whatever and it wasn't even worth the time to install it and play it, much less ten ♥♥♥♥in' dollars.