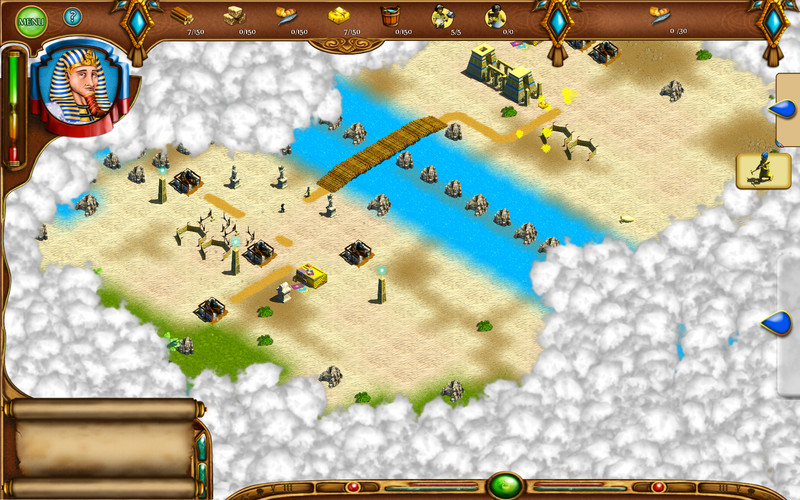 A long, long time ago in Ancient Egypt ...

An unpleasant prophecy by the ancient gods seriously scares the Pharaoh. He orders all his confidants to his court. The thriving meadows, once reclaimed from the desert, are now threatened by desiccation. Worse than that, future harvests are going to be annihilated!

As one of the confidants of the Pharaoh, now is the time to show your skills. You are accompanied by some more or less motivated consultants and architects who will do everything possible to stand by your side during your mission.

The Pharaoh commands you into an inhospitable desert. It is your mission to explore the land, to find oases and open up barren land. Colonize unused lands and protect the whole empire from a devastating famine!
Command the lively Egyptians in an extensive campaign, which is composed of many different challenges. It will be necessary to create thriving metropolises, transform deserts into fertile land, upgrade branches of production and protect your settlement against natural disasters or unpleasant contemporaries.

Trade resources at your market, search for treasuries, build bridges to gain access to remote places and provide your population with food as well as in good mood. By establishing a well-developed economy, your main goal is to provide resources to the Pharaohs warehouses, so the threat of a famine can be prevented!

An exciting and entertaining mixture of time-management and strategy along with many teeming characters is waiting for you. 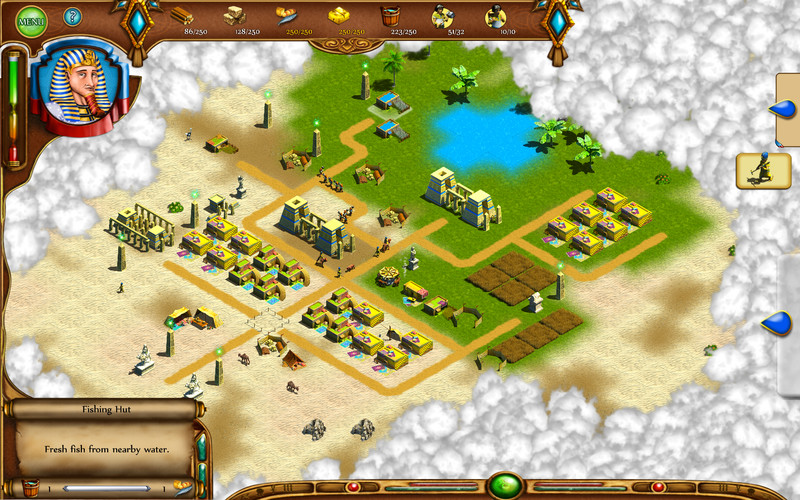 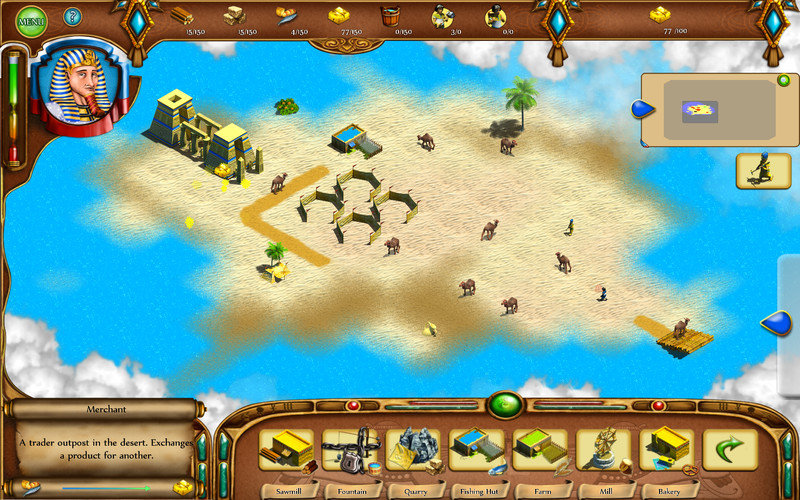 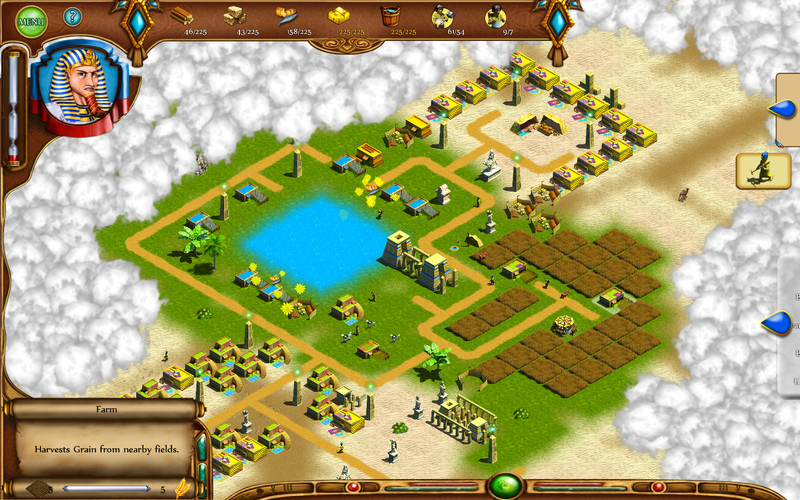 I bought this game thinking it was a light version of a city builder like for example Children of the Nile. Unfortunately, it seems to be VERY light, with hardly any features at all. You'll see everything the game has to offer in one hour or so. And what there is isn't very interesting.

The basics of the game is that you construct buildings, assign a number of workers to those buildings, and they will produce resources for you. Everything is more or less automated and once you assign workers and hire some carriers\/porters you can leave the building alone. There are 5 main resources (food, water, gold, wood and stone), along with ostrich feathers which as far as I can tell doesn't seem to do anything. You pretty much only need one building for each resource, which you can setup in a few minutes. There's also a market you can build which sells all resources for extremely low prices, making most production buildings obsolete once you have one up and running.

There are some support buildings and units, but they are fairly costly and generally doesn't seem to do anything except boost resource production which you probably won't need more of at that point in the game. It's easier just to hire more workers or use the market for everything. The support buildings seems to mainly be there as requirements for the various campaign stages. Unfortunately the campaign very frequently asks you to start over from scratch, making you construct the same very small settlement over and over.

The game graphics, sound and interface seems designed for mobile phones, making the game very easy to control. You do everything with the mouse cursor. The game is also fairly slow paced making it easy to learn. No experience from city builders is needed and the game is usually very user friendly. There is one big exeption to this, which is that the translation to English is very poor and inconsistent, sometimes using the wrong word for key gameplay terms. For example, when starting an endless mode game the text asks you to pick between Normal and Casual, but the buttons are labeled Normal and Relaxed. You can usually figure out what to do by just looking at the pictures, though.

I have unfortunately had the game crash on me during the campaign, forcing me to replay a part of the game. Combined with the very short length and overall very shallow gameplay this means the game definitely isn't worth the price. It's much cheaper on Android phones and the gold version only seem to offer higher graphics resolution and not much more.. PROS:
- SImple gameplay

Cons:
- OKAY! (Horrible voice acting)
- Too simple of gameplay
- Tutorial no matter what.

#TrashORTreasure
. From the initial view I expected something similar to Settlers III, graphic and gameplay likewise, but was let down.
The overall game is designed too slowly paced and too complicated at the same time. After planning a path for a road you need assign a worker to every single tile. The annoying part is that they have to return to the main building before you can assign them to another tile, giving the game the pace of a browser game like OGame or Farmerama. Basically you need to sit there and wait for your guys to return during the first minutes of the game, not able to do anything else.
The explorer you need to locate new areas cannot be sent into unknown territory and sticks to the tiles, which slows him down alot as well.
So overall this game bores you before it even actually started to show you some and adds way too much micro management for a handful of buildings. Plus the english localization appears to be scrappy (missing words etc).. I should have listened to the other reviews.

Just spent 10 minutes combing the desert for a suitable place to build my town.
Not very fun or interesting.