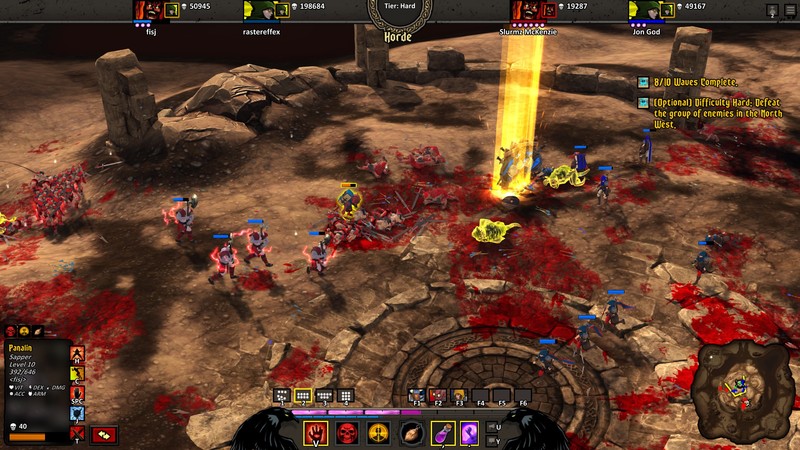 COMMAND YOUR ARMY. HACK YOUR ENEMY TO PIECES. TURN THE HILLS RED.


Deadhold is a gore infused, fast-action, tactical RTS. With support for up to 4 coop players, the gritty dark fantasy world of Deadhold comes to life through its story driven campaign. In multiplayer, Deadhold supports up to 8 players in teams or 4 players in free for all, and a variety of game modes.

A NEW KIND OF RTS


Deadhold’s gameplay is a unique mix of real-time tactics essentials like strategic positioning, unit classes, and physically based simulation similar to such classic games as Myth and Dawn of War 2, combined with the items, loot, and leveling found in action RPGs like Diablo and Path Of Exile. The result is a fresh take on the tactical RTS that should delight fans of both RTS and ARPG genres.

Battles in Deadhold are physically modeled. The flight of an arrow is realistically simulated and will embed inside a units head, arms, legs or chest. Unit movement is based on physics, increasing the value of tactical positioning: A line of warriors can block incoming enemies or force them to engage or go around. The explosive bomb wielded by the Sapper can literally dismember units as body parts explode and fly into the air. Injuries and severed limbs stain the ground realistically with blood.


A dark force has risen in the west, obliterating any who stand in its wake. The last living races have banded together to change the course of fate, setting Deadhold's campaign in motion. Told from the perspective of the narrator, you'll uncover the history of the blight, and the truth that lies behind their creation. The 16 mission campaign challenges you to wield the power of the gods, using tactics and strategy to overcome the onslaught of an overwhelming evil force.

In campaign, the scale of Deadhold’s player choice becomes clear. As a paragon of the Empire, players will choose a Deity in which to specialize. Spells are unlocked as players earn experience, allowing them to customize their play style. Players can further customize their builds by slotting relics, runes, and gems, which can drop from defeated enemies.

A tier based leveling system adds significant replay value to the campaign missions. As players progress through each tier, new and greater challenges and rewards await them: boss-fights, different enemy patrols and tactics, additional mission objectives, and higher quality items.


Competitive multiplayer in Deadhold supports team and free for all play, with up to 8 players in a variety of maps and gamemodes. Leaderboards and tournaments are planned additions during Steam Early Access. b4d347fde0 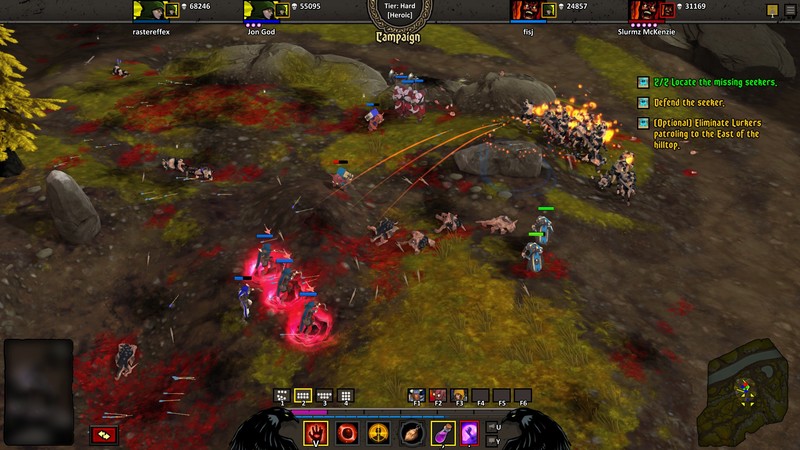 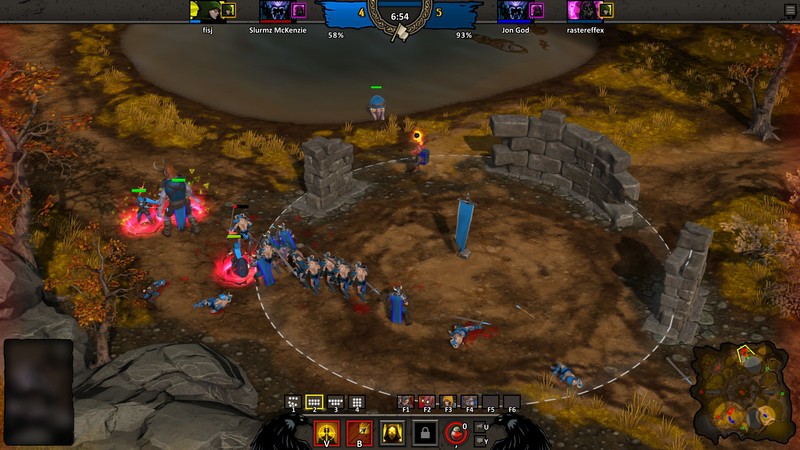 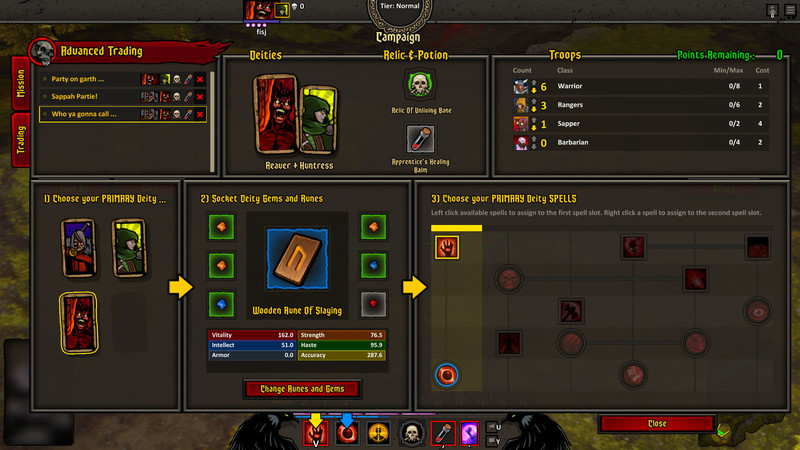 
Myth fans rejoice we finally got a remake of our favorite game. It captures the game features almost perfectly. A fun RTS that brings frantic and organize gameplay as hordes of enemies tries to kill you troops.

Gameplay is very polish for its current state and lots of possible tactics to use to suit each players gameplay style.

Blowing up enemies is very satisfying and seeing the carnage as game goes on is very rewarding.

Upside:
-Bodies everywhere watch the carnage as you longer into horde mode
-Challenging gameplay and rewards the attentive players
-Camera controls is better than its predecessor
-Lots of unit combos to suit players playstyles
-Polish mechanice
-Sappers, you will love them and you will hate them
-Friendly Fire


Downside:
-Price for $19.99 the game doesnt have much to offer content wise and will get repetitive. It has 1 campaign mission which is very short since it is the first one of its series.
-Currently there is 4 multiplayer modes:Horde, King of the Hill, Deathmatch and Territories. Unfortunately the population is still low for the game so if you want to play with others there might be a long wait.
-Steep learnign curve for new players who has not played Myth before.
-Gear is drop randomly when you any modes thus can hinder gameplay if you are unlucky.
-A bit grindy to unlock all the skills specially at its current state its just repeating the same horde mode over and over again.
-Voice acting is a bit monotone and unit lines is a bit bland, character models are great though.

As much as I love the game and what memories it brings back playing Myth. I cant recommend this game at its current status for its current price point, maybe overtime when more content is out for the public. Yes I understand this is on its Alpha, from what developer is saying the price will increase as more content comes out lets just hope they dont get too greedy with the price point. One short campaign mission and one multiplayer mode does not justify its $19.99 price tag.. Devs have unfortunately decided to not continue development.. Took money and dropping the game. couldnt even get a refund on the this game even though its dead in the water.. Devs have unfortunately decided to not continue development.. Only just getting to grips with this game - and I must say - the combat mechanics, voice acting and gameplay are all very fluid. This could be a complete gem ifthe devs keep adding to it. Plenty of gameplay to start with (even for an Early Access Title) and the balance in units appears great! I hope this game makes it as it's showing a ton of promise up to now!

7\/10 - could easily move higher on release or as things are addded.

www.youtube.com\/watch?v=dDalsJWVJrI\" target=\"_blank\" rel=\"noreferrer\" id=\"dynamiclink_0\">https:\/\/www.youtube.com\/watch?v=dDalsJWVJrI<\/a>. \u2665\u2665\u2665\u2665 you devs, you put this on sale at Xmas and then cancel the development after a bunch of people buy it. No way to refund this on steam. I played it for 30 minutes. It was a barely complete level.. One of the biggest fans of Myth. I spent years of my life playing it. I've played thousands of single-player games and this is the only multiplayer game I enjoy. There is no better multiplayer game. It's also pretty much impossible to ever make this for consoles so don't wait for a port. I play 99% of my games on a console but this one can only work on PC due to the many buttons and fast clicks needed to move the camera and select and move units.

Deadhold revives Myth and any fan should enjoy it. It adds a few new things and some changes, like health potions instead of Journeymen. New stuff is dropped items and spells you can use, including a Resurrect option for dead units. But most of it is the same Myth you knew and loved. If you never played Myth I have no idea how to recommend or explain this game to you. It's like an RTS but with no buildings or unit-making or resources. You choose your units at the beginning of the match and then micromanage till the end. That's what makes the multiplayer so fun is that you can work as a team with different units, or micromanage against others. Combine that with the physics\/gibs and you can never not have a good time. Right now, on day one of Early Access, this is already a solid "good". It has the potential to be the greatest game ever made. We'll see. gla. Took money and dropping the game. couldnt even get a refund on the this game even though its dead in the water.. So far so good! Just had time to get through the tutorial and it feel like I am playing Myth 2. Can't wait to get into the campaign and multiplayer.. Game has been dead since the summer. Save your money until the devs become active again. It's sad to see this happen but Myth still exists and people play, I recommend that for now still.