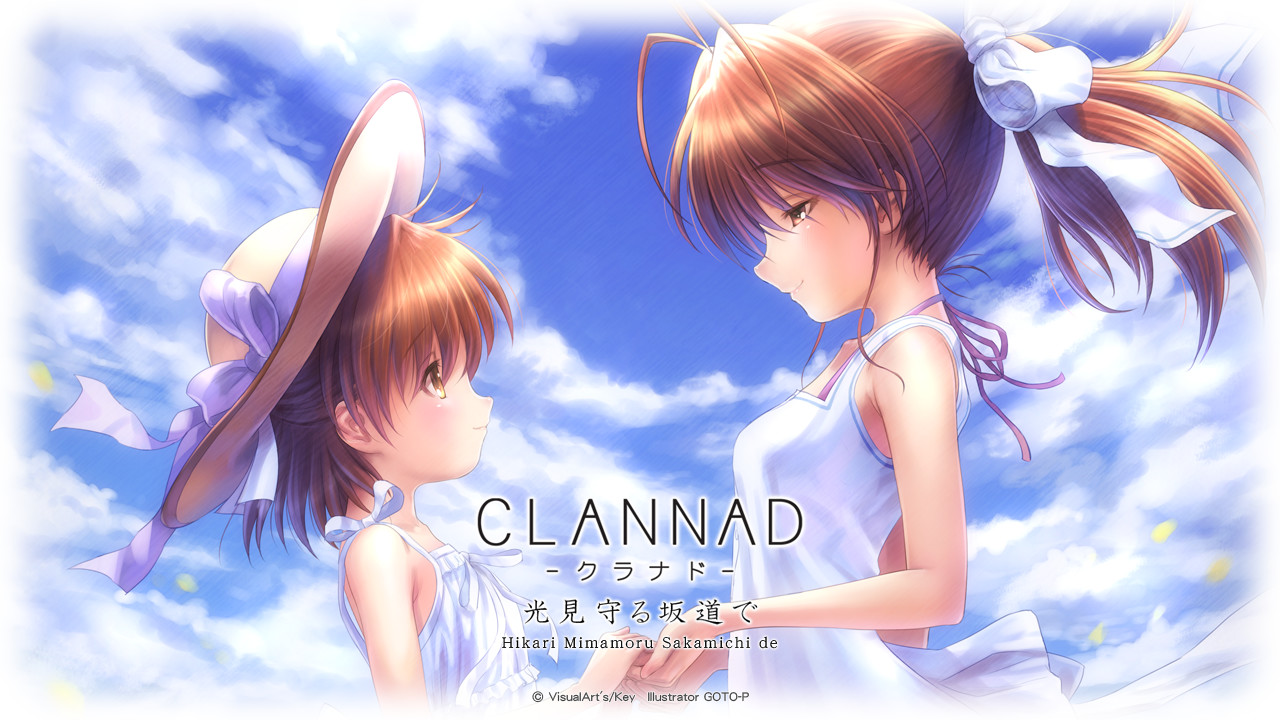 Delve further into the world of CLANNAD and experience the stories beyond the original visual novel adventure. Known as CLANNAD Hikari Mimamoru Sakamichi de in Japan, this collection of linear side stories allows you to explore and experience new sides and twists to your favorite characters from the little town of Hikarizaka. These are the stories which are not explored in either the visual novel or in the anime adaptation.

After the death of his mother, Tomoya Okazaki—a guarded delinquent student at Hikarizaka High School struggles to find meaning in his life. While on his way to class one morning, he meets a mystifying girl named Nagisa. From their brief encounter, Nagisa decides they should be friends, and enlists Tomoya's help to revive the school drama club. Along the way, the two make friends with many other students and try to find both solace and belonging in their endeavors.

Originally released on the PSP handheld platform, this all new Steam release collects all the side story chapters and features high resolution assets at 1280x960 and in English for the very first time. 7ad7b8b382 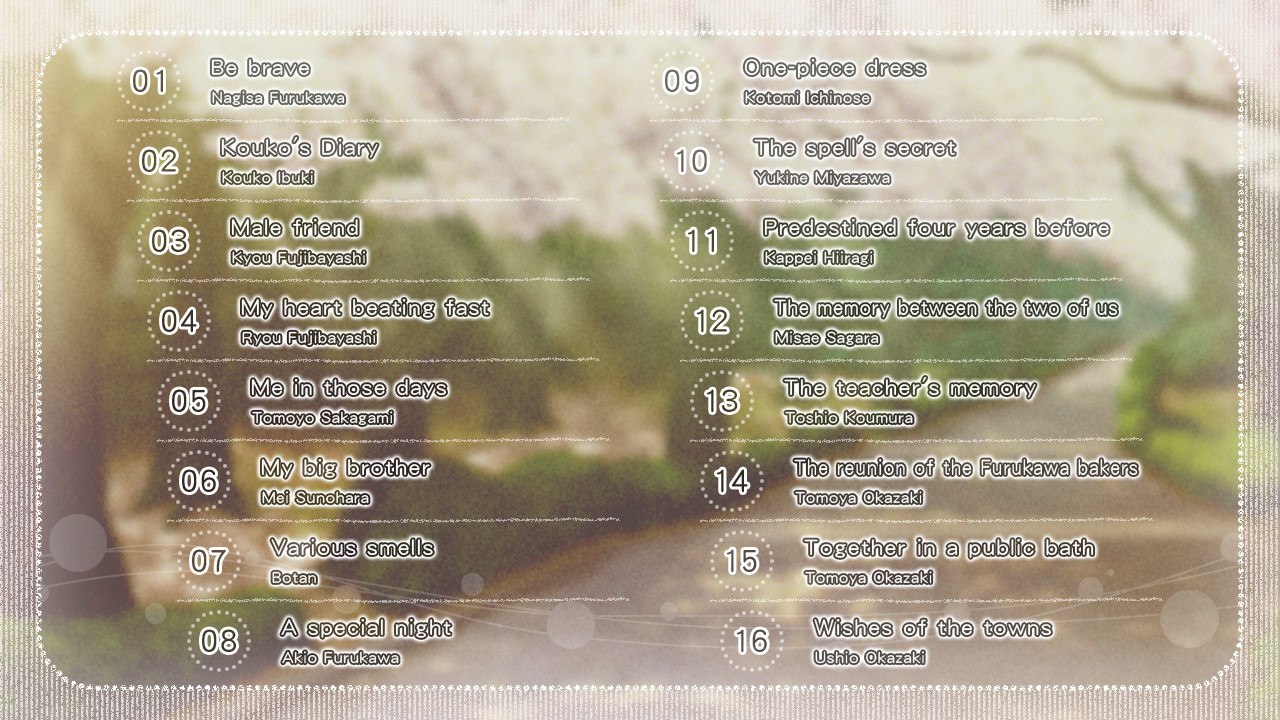 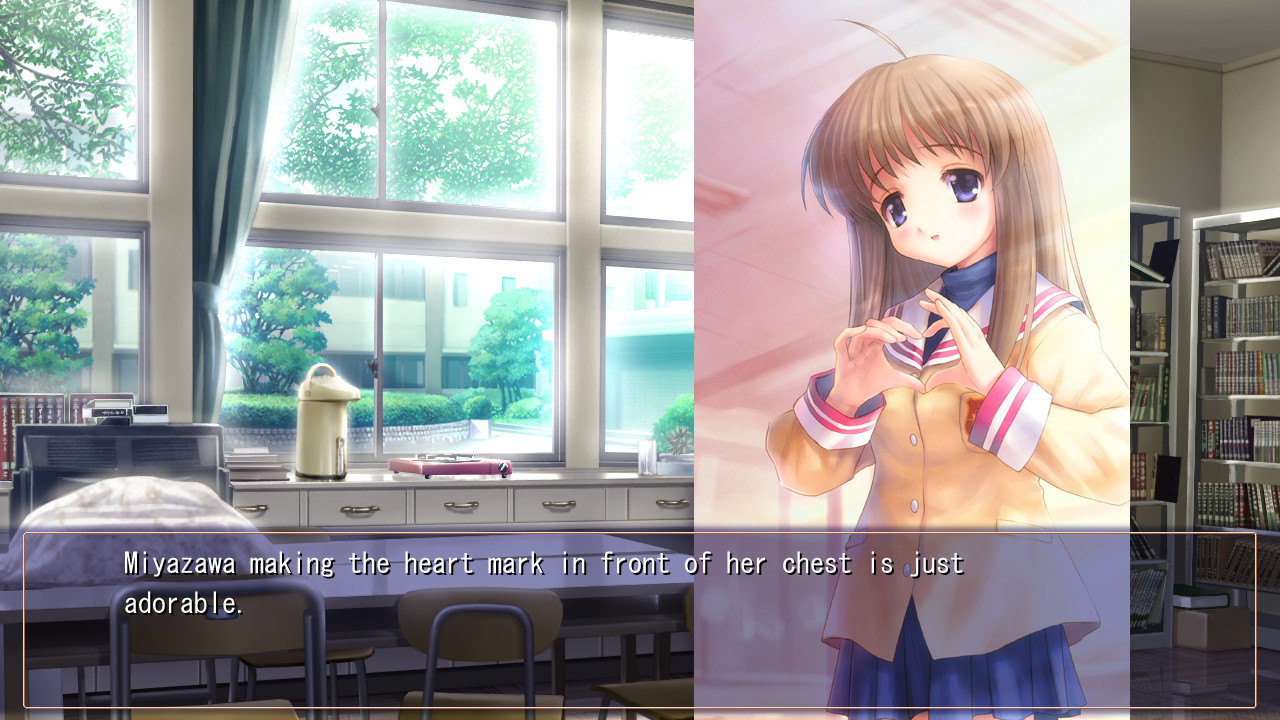 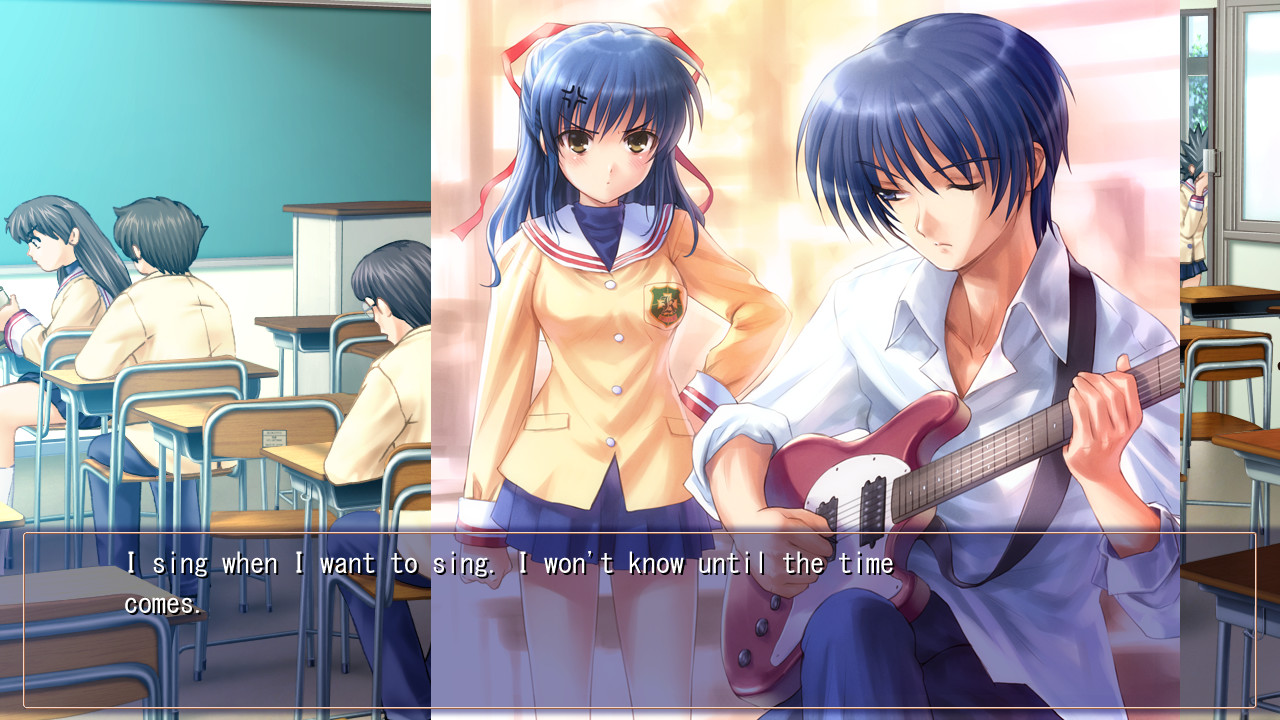 
I found most of the tales in Clannad Side Stories pretty uninteresting, but there are a few gems there that makes it worthwhile. Just make sure to pick it up on sale, because the regular $20 price point is a bit steep considering what you get.

Some things to keep in mind:

- There are no character sprites, so other than a few CG's, the entirity of Clannad Side Stories consists of voiced text over a static background.
- Slow pacing due to having to wait for the voiceover to finish before the text progresses to the next line. It's not possible to move forward by using the mouse or keyboard, like in a regular visual novel.
- On the other hand, if the text is longer than the dialogue box, you actually have to press the mouse button. If you don't, the text will not advance, but the scene and audio will continue playing anyway. If you don't push the button immidiately, the text will try to catch up to the audio, meaning the speed will increase and you'll most likely miss some of it.
- There's no message log or way to rewind scenes, so if you happen to miss any part of a dialogue, you'll have to replay the whole chapter, without any way to skip forward, just to see it again.
- It can be unclear if the voice is narrating or speaking to another character, due to lack of quotation marks and character names in text boxes.
- Sometimes a scene transition means it's a new chapter and sometimes it doesn't, so the only way to really know if it's a new chapter is to manually check the chapter list and try to figure it out by comparing chapter thumbnails and titles to the current scene. This isn't much of an issue if you're watching an entire episode in one go, but I figure I should mention it.
- There's no option in the menu to exit the game, so you have to use either Alt+F4 or Ctrl+Alt+Del to do so.. Not to write another book review as I did for Clannad, but let me just say this real quick, Clannad Side Stories is a quick six-hour game at a minimum that gives you 16 quick routes for each character you met in the original Clannad. Each route is around 15-30 minutes long with interesting\/unique stories to them. They don\u2019t have to branch off the main story that happened in Clannad, but certainly gives you some interesting content for each character you meet. As someone who played Clannad in and out with each character route, I can say that this mini-game really helped sort some stuff out about each character that I never knew before. For a full price of $20, I would say that it\u2019s not worth the minimum of 6 hours of \u201cgameplay,\u201d but for the sale value of $5, I would say sign me up!

I say that it\u2019s a minimum of 6 hours of \u201cgameplay\u201d because unlike all visual novels, you cannot click your way through the text. The character route you choose at the beginning has a narrator for each, and you have to wait for them to read the entire text on the screen before it moves on. In other words, you barely touch your mouse for this one, and only listen\/read the text in front of you. The art is really nice and unique as it does give you some nice touching moments here and there but certainly does not live up to the altitude of the original Clannad.

I would say that overall, Clannad Side Stories is a must for all Clannad lovers out there as it gives more of each character to the reader. It may seem pretty boring here and there, but the stories that are told are cute and heartwarming enough to read at least one time through. I would definitely not play this until you complete all of the original Clannad, but I feel that goes without saying here. If I had to give this a rating, I would say 7\/10. Good music, good art, okay story, not the best price, but worth it overall at the sale price.
. Did you finish CLANNAD and want to learn some more about the characters? If so, I definitely recommend getting this game as long as you keep a few things in mind. This is a slightly different type of visual novel in that you'll be reading the text and it will go onto the next message when the voice clip is finished - Tomoya himself is voiced this time, and there are no character sprites, but there are a few CGs in each side story. I didn't mind the different style they went with but I think it would have been nice if there was an option to let you click to advance the text, since some people might not be able to read quickly.

The stories also never really reach the emotional highs of the original, although that definitely isn't the focus of the game. Most of the stories takes place before or after the characters routes and almost all of the cast of the original game get some screentime. Botan even has its own story which I thought was pretty charming, but I think my favourites were from Kouko, Mei, Akio, Kappei, Misae and Ushio. It's definitely nice to see some more details on these characters, seeing the future of the ending from the original game was nice.

As I mentioned before the game has some CGs and they look pretty nice, I think they went with a different artist or art style. The only issue is you can't view the cgs by themselves which is pretty lame...in<\/a> terms of the music, it's the same from CLANNAD but a lot of it is remixed at least. The game has a pretty bad first impression because in the first story there's a scene where the images aren't translated so I couldn't really follow the conversation but it's the only time in the game this happens.

Overall I think you should pick this up if you want to learn a bit ...