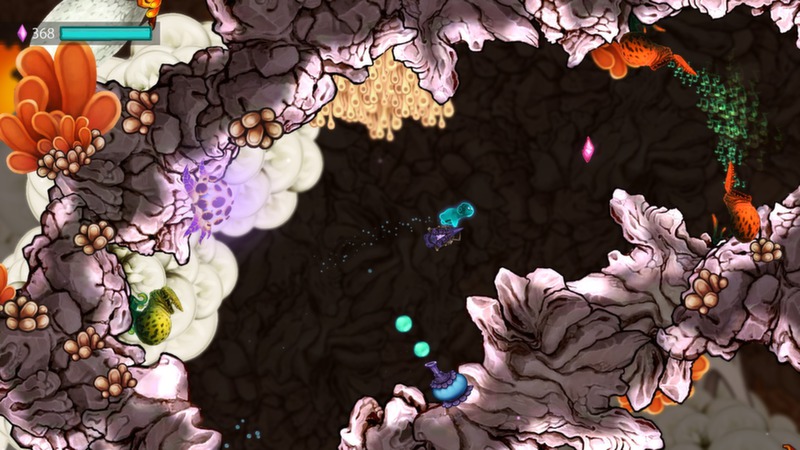 Awakened from his slumber, Beatbuddy journeys through lush hand-painted environments on a quest to save his companions and his own immortality. Beatbuddy interacts with the living breathing environment that pulses to the beat of an original soundtrack, aiding him as he unlocks new paths and solves puzzles. 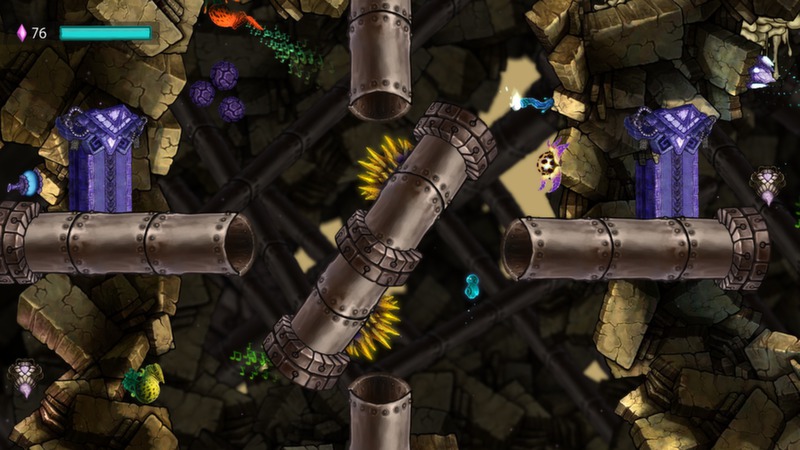 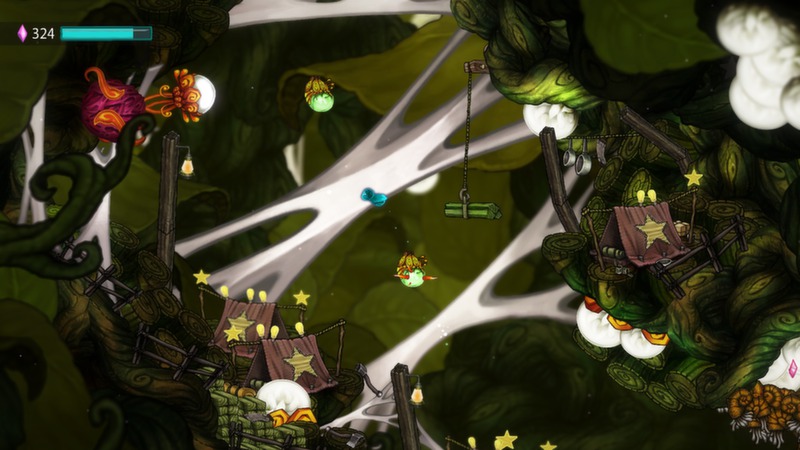 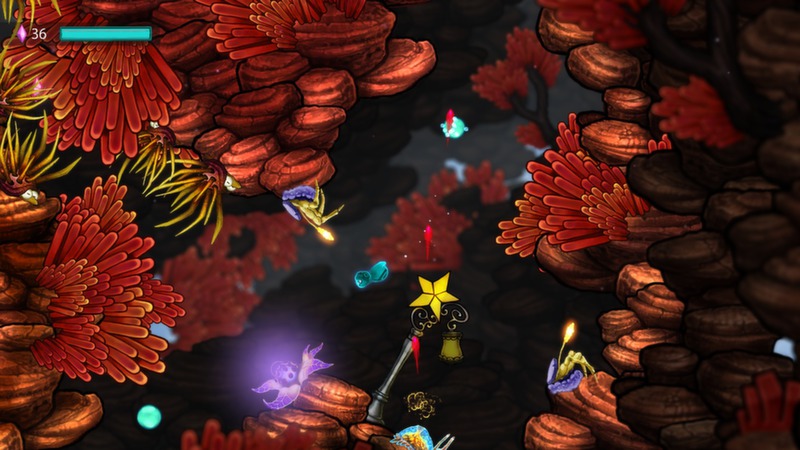 I can absolutely recommend this game. I agree in a way with the sluggish controls many reviewers describe but they rarely keep me from really enjoying this game. They just become part of the challenge and I feel you can master them without being too irritated about it. The pure fun and enjoyment of simple but groovy gameplay is all worth it though and the puzzles do progress the further you go. I've been playing this game with my projector on a 100 inch scale and the visuals and detail in the art are mind-blowing. At times it's like an lsd-trip.

This game was completely worth it for me.
If you're not sure, just get it in a sale, you won't regret it.. Is awesome visuals and great music alone enough to sell a game? Not to say Beatbuddy offers nothing else but that was my first thought as I spotted this brilliant looking game. It seems to me often indy games either focus on game play or art and usually sacrifice one for the other. It is an unfortunate decision when it comes to the meager budgets such studios often have to work with. Beatbuddy certainly focuses on the visuals with some amazing eye candy that I can tell was lovingly crafted by a very hard working artist and on top of that it incorporates some amazing music into it as well.

So the game looks amazing and features some pretty good music. But the ultimate question we always have to ask ourselves, how fun is it? Visuals are great but in my experience after a few hours of playing the wow-factor always wears off no matter how pretty the game is. At that point I just focus on the whole purpose of the game, playing it! Steam classifies Beatbuddy as a \u201cCasual Indie Platformer Action Adventure\u201d game. And while it does fit into the extremely generic Action Adventure classification, platformer seems not to do the game justice. Was Echo the Dolphin a platformer? That is what reminds me most of Beatbuddy\u2019s gameplay style. And it is refreshing to see something similar with your little Beatbuddy swimming around the world rather than jumping from platform to platform. If anything its more of a puzzle action game as you traverse the beautiful looking water caves of \u2018Symphonia\u2019.

Part of me feels like there was some sort of checklist over in Threaks\u2019 development studio. What does a good action puzzle game have to have? Launch springs? Check. Vehicle sections? Check. Teleporters? Check. Dashing Combat? Check. Collectibles? Check. Open and closeable doors? Check. Moveable walls? Check. While nothing is particularly ground breaking it is certainly full of your typical puzzle elements. The vehicle section seems to offer the only really unique little caveat with your vehicle only being able to shoot in one direction and you have to find these arrow points to rotate you around so you can blast through different parts of the maze. Overall it\u2019s a pretty good set of puzzle game components but I have one annoying complaint. Beatbuddy introduces one element at a time and gives you time to master each element before adding a new. This is a good idea and all but I feel they take too much time introducing new elements. Because of this the first 4\/5 of the game feels like little more than a long drawn out tutorial where you master each element and then mix it in with some old element, then move on.

This makes the first few levels feel incredibly unchallenging. Frankly I was starting to get bored but kept plowing through anyway. The visuals and music were almost enough to make up for the slow increase in complexity but the game was really lagging halfway through. Yet when I reached the last level and all the different complex systems were used together, the game was really quite fun. The only problem was I had about 45 minutes of fun after about 4 hours of meh. If the game had kept going, had a few more levels with all the toys in them, I\u2019d have been really really happy with this game. Yet it left me somewhat disappointed when it ended. And the game is really much too short. Even though I was taking my time (flower sniffing as my MMO friends would say) I still completed the whole game in under 5 hours. That seems a bit of disappointing value for the $15 cost of entry even with the great music and visuals. Hell, you know a game might be too short when there\u2019s an achievement for beating it in under 3 hours!

The music system however is really quite good. I actually hope mainstream game developers might take a few chapters out of Beatbuddy\u2019s book here. Each level (or track) has a unique song that flows in the background and changes dynamically based upon what you are doing. It will kick up into full gear when you\u2019re in a vehicle or lulls back to a simple beat when you\u2019re just mellowing in empty water. It is further enhanced as enemies add their own tracks that work into the rhythm of the song. This gives me ques as to upcoming enemies such as snare drums means I\u2019m going to be running into some spike guys soon or a throbbing base drum means there\u2019s a springy thing around. The best use of this is the snail mounted turrets that shoot at you in beat to the song. It\u2019s really quite clever and makes me really feel the rhythm as I try to dodge deadly flying objects.

For the most part I felt like Beatbuddy might be too easy. The game is incredibly forgiving most of the time with your character able to take many hits and plentiful sources to replenish health abound (heck your vehicle automatically restores health after just a couple seconds). None of the puzzles are mind bendingly difficult and only one or two near the end even take more than a few moments of thought to figure out. I almost feel like the developers didn\u2019t want you to have any troubles in seeing their beautiful art\/music project and made sure the game did not get in your way. There are a couple places that I got a little frustrated at but nothing so bad as to make me rage quit and generally I was able to figure out a way forward and continued my progress.

While the game seems fairly well polished I did run into a few blemishes along the way. The intro and ending cut-scenes (which featured a horribly annoying beat-bop voice that I just wanted to strange!) had a white border around the hand drawn visuals. And then the caption, in white, bled over the border making it hard to read what was said. Since the voice was trying too hard to be beat-ish I could hardly understand was was said either. Also I found a few places when running from a collapsing ceiling (check) where I would get stuck. The ceiling collapsed down then stopped and locked me in a small box with no escape and I ended up having to quit and launch the game again to go back to the most recent checkpoint. For that matter, checkpoints? I thought we were past that ancient system! Another thing that really drives me bonkers is the camera constantly zooming in and out. I wish they\u2019d pick a zoom level and stick to it, preferably far enough away that I can see where the hell I\u2019m going rather than the tight shots that make it far too easy to get lost.

Also don\u2019t look for much in terms of story here. I think there might have been somebody somewhere with a nice story but almost none of it is portrayed in the game. It feels like it was ripped out of your typical tropes, some army invades some temple, kidnaps the princesses, and you have to rescue them. Also once you finally catch up to the end boss don\u2019t expect some climactic final fight, the ending is more anti-climactic than doing laundry.

Read more indy game reviews on my blog!
http:\/\/markofithian.com<\/a>. A funky casual game with some quality music.
You play as a small blue charactor swimming around to the beat of the music whilst following a small stroyline, you have obsticles to get by and a few puzzling situations which are not difficult to figure out, the path in which you take is also pretty obvious, but the music makes the game which is enough to keep you entertained for a couple hours or more.
Graphics are great, controls are simple enough to use aswel, overal...