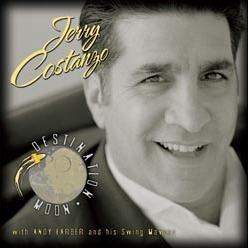 On the heels of his most recent successful CD release, Destination Moon, Jerry Costanzo is back in the studio putting the finishing touches on his upcoming CD release, to be announced late fall of 2009. Radio Hosts and the Press are already clamoring for Jerry Costanzo’s next CD.
“after hearing Destination Moon. I've played several tracks by this talented individual. Some good stuff from his CD. Look forward to his next disc.” -- Barry Rosen WHCJ-FM The Voice Of Savannah State Radio

“Thanks for sending me this CD which will be featured in my Jazz programmes, keep up the good work and keep me posted of any other forthcoming releases” -- Martin Smith, Radio Seagull

Jerry grew up in an atmosphere of rich musical history. His father taught Jerry to play saxophone when He was in the third grade. Jerry later went on to study acting with William Hickey (nominated-best supporting actor, Prizzi's Honor). In the early 1980s Jerry started subbing out on Alto Sax with his father’s big band, The Memories Of Swing. Before that, he played in the horn section of a classic rock band and did some singing. Jerry’s career took on a new dimension when his father asked him to sing with the big band.

“You've never heard a singer like Jerry Costanzo before. Not only is Jerry's voice the perfect accompaniment to the smooth, upbeat, and incredible sounds and musical craftsmanship of Andy Farber and his Swing Mavens, but this album is just completely supersaturated with Jerry's passion and personality. . . . “ – Dan Costa, New Paltz College Radio.

“…Jerry Costanzo delivers a song with a loving nod back to the Rat Pack. I mean that in the best possible way.” “…Andy Farber's Swing Mavens puts this far above schmaltz. Maybe it’s in the subtle interactions between Costanza and the horns. Maybe it's the cool-cat finger¬snap/bass introduction ...” -- Mark Saleski JAll.com

Listen to Jerry Costanzo’s new release, Destination Moon and watch out for his upcoming release.